Fact Check: No, Microwave ovens are not banned in Japan 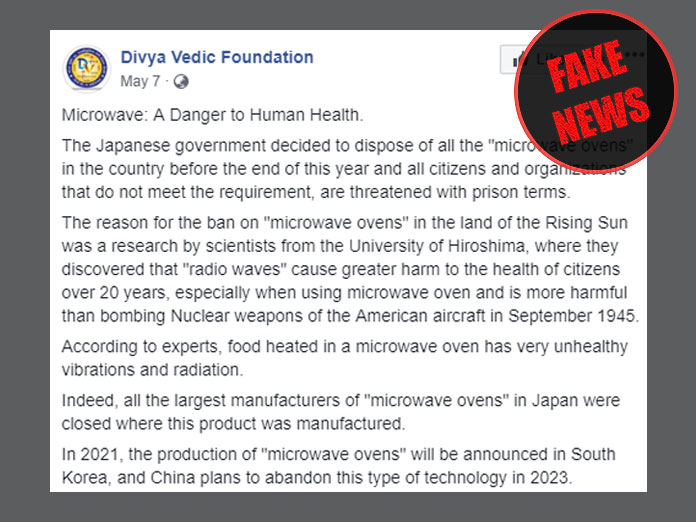 A post is getting viral across social media claiming that the Japanese Government has decided to dispose of all the “microwave ovens” in the country before the end of this year. The reason for the ban on “microwave ovens” in the land of the Rising Sun was a research by scientists from the University of Hiroshima, where they discovered that “radio waves” cause greater harm to the health of citizens over 20 years, especially when using microwave oven and is more harmful than bombing Nuclear weapons of the American aircraft in September 1945.

A post shared on social media reads: Microwave: A Danger to Human Health. The Japanese government decided to dispose of all the “microwave ovens” in the country before the end of this year and all citizens and organizations that do not meet the requirement, are threatened with prison terms. The reason for the ban on “microwave ovens” in the land of the Rising Sun was a research by scientists from the University of Hiroshima, where they discovered that “radio waves” cause greater harm to the health of citizens over 20 years, especially when using microwave oven and is more harmful than bombing Nuclear weapons of the American aircraft in September 1945. According to experts, food heated in a microwave oven has very unhealthy vibrations and radiation. Indeed, all the largest manufacturers of “microwave ovens” in Japan were closed where this product was manufactured. In 2021, the production of “microwave ovens” will be announced in South Korea, and China plans to abandon this type of technology in 2023.

Vishvas News started the investigation by searching whether microwave ovens are banned in Japan.

We searched the articles related to “Microwave Ban” on the official website of the Ministry of health, labour and welfare of Japanese government. The search showed no results.

Using Twitter Advanced Search, we searched for the announcements by the Japanese government’s official English-language Twitter account about microwave ovens. But this search yielded to no results.

The official website of Prime Minister of Japan also showed no results.

At last we found an article dated March 3, 2019. The article was written in Russian language and had the headline “Japan to finally give up microwave ovens by 2020”. The article had been posted on the website panaroma.pub.

When we read the details of the website, it was clearly mentioned that the website is a satirical publication all texts on this website are grotesque parodies of reality and are not real news.

We further searched about the microwave’s impact on food. We found a report on the website of Harvard Medical School. As per the report, microwave cooking is actually one of the least likely forms of cooking to damage nutrients. That’s because the longer the food cooks, the more nutrients tend to break down, and microwave cooking takes less time.

According to the World Health Organization (WHO), when used according to manufacturers’ instructions, microwave ovens are safe and convenient for heating and cooking a variety of foods. However, several precautions need to be taken, specifically with regards to potential exposure to microwaves, thermal burns, and food handling.

The article further reads: To dispel some misconceptions, it is important to realize that food cooked in a microwave oven does not become “radioactive”. Nor does any microwave energy remain in the cavity or the food after the microwave oven is switched off. In this respect, microwaves act just like light; when the light bulb is turned off, no light remains.

Delhi-based nutritionist Avni Kaul says that it is important to clear some of the misconception or half knowledge that arises regarding food cooked in microwaves. As per nutritionist Avni Kaul, the only real threat is the usage of plastic containers particularly those that do not have a label which says “microwave safe”.

It is a known fact that plastic items tend to melt under high heat. This, in turn, leaks harmful chemicals which mix with the food and causing hazards to human health.

No, the Japanese Government has not decided to dispose of all the “microwave ovens” in the country before the end of this year. The viral post is fake.