Fact Check: No, Paracetamol does not remain in the body for 5 years 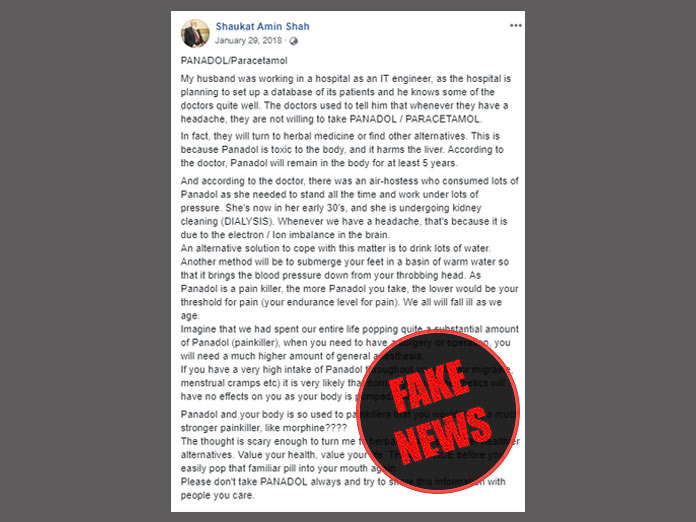 A post is getting viral which claims that Panadol or Paracetamol remains in the body for 5 years. Vishvas News investigated and found that the viral post is fake.

A post is getting viral on social media claiming that Panadol is toxic to the body, and it harms the liver. It further claims that Panadol remains in the body for at least 5 years. The post is shared on Facebook by a user named Shaukat Amin Shah.

Vishvas News started its investigation by searching about the medicine Paracetamol. We found that Panadol is the trade name of Paracetamol.

We further searched and found that paracetamol is on the list of essential medicines of the World Health Organizations (WHO).

We also found a study on the official website of US National Library of Medicine. It states that: following oral administration, Paracetamol is rapidly absorbed from the gastrointestinal tract.

It is further stated on the website if US National Library of Medicine that: in healthy subjects, 85 to 95% of a therapeutic dose of Paracetamol is excreted in the urine within 24 hours.

Vishvas News spoke to Dr. Sajeev Kumar, who is a General Physician. He said that the claim that: Paracetamol remains in the body till 5 years is false. It gets eliminated from the body in a matter of hours.

The claim that long term use of Panadol will permanently reduce a person’s pain threshold is unsupported. As per Dr. Sajeev Kumar, this claim is not proven.

The post claiming that Paracetamol remains in the body for 5 years is fake.