Fact Check: No, this illusion cannot determine your state of mind 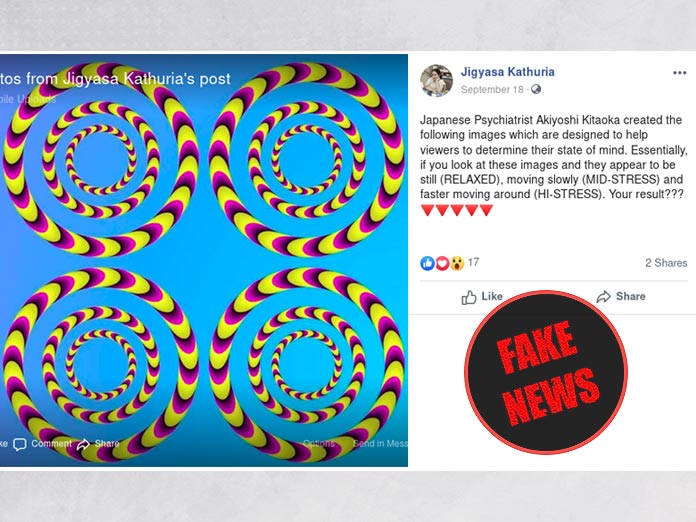 An image shared on social media claims to have been created by a Japanese psychologist Akiyoshi Kitaoka. It claims that the image has been designed to help viewers to determine their state of mind. Essentially, if you look at these images and they appear to be still (RELAXED), moving slowly (MID-STRESS) and faster moving around (HI-STRESS), as stated in the caption of the viral image.

Vishvas News started its investigation by observing the viral image. The image contained four winding circles positioned in a blue square background. Each set of the circles contains three rings in yellow, black and violet, which appear to move, in a first glance.

We searched online whether there is any Japanese psychologist by the name Akiyoshi Kitaoka and whether he has made any such claim.

We searched the social profiles of the Japanese psychologist Akiyoshi Kitaoka and found a post in which he suggested that the visual illusion has nothing to do with stress. H

Vishvas News spoke to Dr. Esha Mehta, who is a Psychologist. She said: “Illusions are meant to trick people. This image has nothing to do with the state of mind or to determine the stress levels. The claim is completely false.”

No, the visual illusion shown in the viral post has nothing to do with stress or in determining the state of mind.