Fact Check: No, WHO hasn’t issued advisory against buying of Holi colors from Coronavirus-hit China 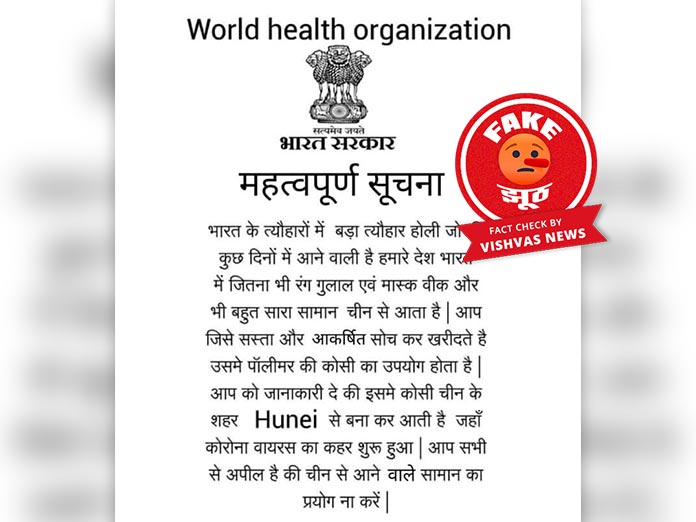 A viral post on social media states that World Health Organization (WHO) and the Government of India have cautioned citizens by issuing an advisory for people not to use colors and products from coronavirus-hit China during Holi. Vishvas News investigated and found that the viral post is fake. Neither World Health Organization (WHO) nor the Government of India has issued any such advisory.

Vishvas News received an image on Whatsapp to fact check. The image claimed that World Health Organization (WHO) and the Government of India have cautioned citizens by issuing an advisory for people not to use colors and products from coronavirus-hit China during Holi.

Vishvas News started its investigation and found that there were multiple errors in the viral image which was attributed to World Health Organization (WHO) and the Indian Government.

We observed that there were many spelling and syntax errors in the post.

We further checked and found that Hunei city mentioned in the post is not in China but is a rural district in Taiwan. Hubei is a district in China which is the epicenter of the 2019 novel Coronavirus outbreak.

Neither World Health Organization (WHO) not Indian Government has issued an advisory mentioning to avoid buying of colors from China during Holi.

Vishvas News had a chat with Supriya Bezbaruah, Public Health Risk Communication Specialist, World Health Organization (WHO) over whatsapp. She also denied when asked whether WHO released any such advisory warning people against buying of colors from China.

World Health Organization (WHO) has issued some myths on Coronavirus which can be read here.

Vishvas News has earlier investigated fake stories on 2019 Novel coronavirus which can be read here.

Conclusion: WHO hasn’t issued advisory against buying of Holi colors from Coronavirus-hit China. The viral post is fake.