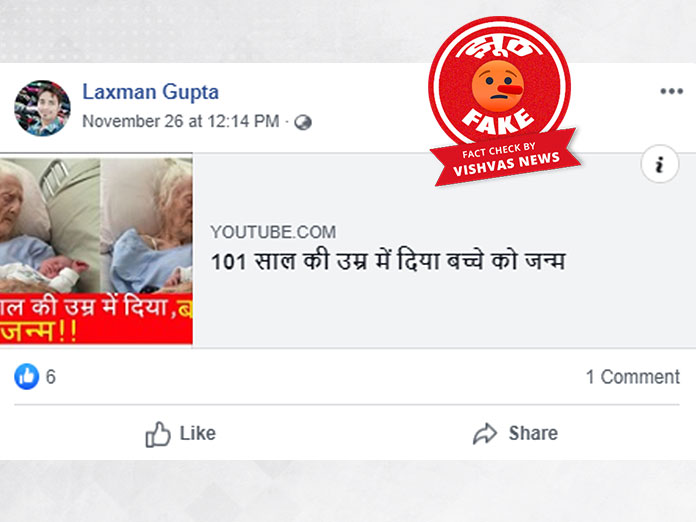 A video getting viral on social media shows an old woman holding a newborn. The video claims that a 101-year-old woman gave birth to a child and the baby shown in the video is her 17th child. The narration in the video goes, “The woman had given birth to 16 children after which she was diagnosed with cancer and now she has delivered her 17th kid.” Vishvas News investigated and found that the claim is false.

A video doing rounds on social media claims that a 101-year-old woman gave birth to a child. The narration in the video states that the woman had given birth to 16 children after which she was diagnosed with cancer and now she has delivered her 17th kid.

Vishvas News started its investigated and found that the video surfaced on social media since 2015. The Youtube video has been shared by many Facebook users.

We landed on a report by ABC News dated March 31, 2015. The article headlined ‘101-Year-Old Great-Grandmother in Heartwarming Viral Photo Dies,’ carries the same image that is seen in the YouTube video.

The article reads that “Rosa Camfield, a 101-year-old woman featured in a photo holding her great-granddaughter, has died — even as the photo continues to burn up the Internet, inspiring others to post multi-generational images.”

The photo initially was posted by Camfield’s granddaughter Sarah Hamm, who was shocked to learn it was being shared by millions across the Internet.

Hence, the viral video showing an old woman holding a child is that of a great-grandmother holding her great-granddaughter.

We also spoke to Dr. Anita Gupta who is a gynecologist at Fortis La Femme. As per her, so far she hasn’t heard any such case where a woman can deliver a baby at 101 years of age.

On October 15, 2019, various news websites reported mentioned as a case of a 75-year-old woman who became the oldest mother after giving birth through IVF.

Many media websites shared the news of the Indian woman who became the oldest mother after giving birth through IVF.

The post claiming that a 101-year-old woman delivered a baby is fake.