Post claiming army getting deployed in Telangana amidst COVID-19 outbreak is fake. The post is refuted by the Hyderabad Police Commissioner Anjani Kumar and Indian Army. 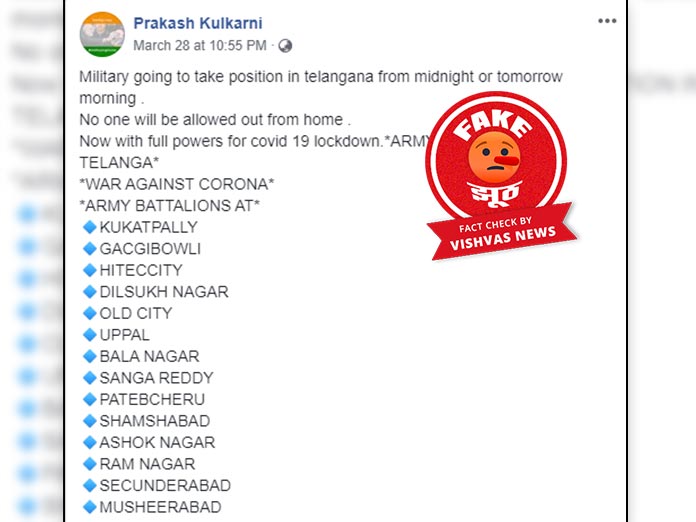 Social media is deluged with misinformation around the Coronavirus outbreak. A recent viral post (posted on March 28) on social media claims that the military is going to be deployed in Telangana starting midnight or tomorrow morning. It further claims that nobody will be allowed to go out of their homes as the army will be in full action. Also, the names of different reasons were mentioned where the army will be positioned. Vishvas News investigated and found that the viral post is fake.

The viral post on social media shared by a user named Prakash Kulkarni reads: “Military going to take position in telangana from midnight or tomorrow morning . No one will be allowed out from home . Now with full powers for covid 19 lockdown.ARMY IN ACTION IN TELANGA WAR AGAINST CORONA ARMY BATTALIONS AT KUKATPALLY GACGIBOWLI HITECCITY DILSUKH NAGAR OLD CITY UPPAL BALA NAGAR SANGA REDDY PATEBCHERU SHAMSHABAD ASHOK NAGAR RAM NAGAR SECUNDERABAD MUSHEERABAD.” The archived version of the post can be checked here.

Vishvas News started its investigation by contacting Hyderabad Police Commissioner Anjani Kumar and shared the viral message with him. He said: “This is completely fake. This is a rumour getting viral in the name of Telangana and its regions. People should not spread misinformation in the name of COVID-19.”

Vishvas News further searched and found a tweet by Indian Army’s official twitter handle. The tweet mentions that, “Fake and malicious messages are circulating on social media about likely declaration of emergency in mid-April and employment of #IndianArmy, #Veterans, NCC and NSS to assist the civil administration. It is clarified that this is absolutely FAKE.”

Vishvas News performed the social scanning on the Facebook user who shared the viral post. The user named Prakash Kulkarni is based out of Hyderabad as its profile suggests and has been sharing misleading posts earlier as well.

Conclusion: Post claiming army getting deployed in Telangana amidst COVID-19 outbreak is fake. The post is refuted by the Hyderabad Police Commissioner Anjani Kumar and Indian Army.