No, Gates Foundation is not planting microchips during COVID19 swab testing. Viral post is fake. 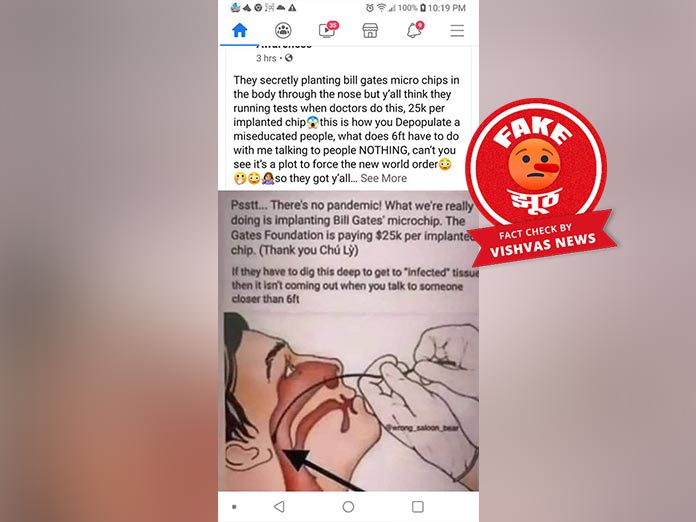 New Delhi (Vishvas News): A viral post on social media claims that there is no coronavirus pandemic and it is just a coverup of Gates foundation. It further claims that the Gates Foundation is secretly planting bill gates microchips when patients’ noses or throats are swabbed during COVID-19 testing. Vishvas News investigated and found that the viral claim is false.

The post doing rounds on Facebook claims that there’s no coronavirus pandemic! It further states that what we’re really doing is implanting Bill Gates’ microchip and the Gates Foundation is paying $25k per implanted chip. The complete post can be read in its archived version here.

As per Centers for Disease Control and Prevention (CDC), COVID19 testing can be done on samples obtained by various methods, including a nasopharyngeal swab, sputum (coughed up material), throat swabs, etc. There are certain Specimen Handling and Storage guidelines that are followed after swab collection. There are no reports that state COVID19 testing implants microchips in the throat.

During our investigation, we came across a report titled: “Bill Gates will use microchip implants to fight coronavirus”. The report includes a quote from a Q&A with Reddit about COVID-19: “Eventually we will have some digital certificates to show who has recovered or been tested recently or when we have a vaccine who has received it.”

As per a Reuters report on the same subject, Bill Gates did mention the possibility of having a “digital certificate” for health records “eventually,” but he did not say these certificates would be “microchip implants.”

Vishvas News contacted Gates Foundation over mail. They replied: “Thank you for enquiring to us. This is a fake news that Gates Foundation is planting microchips during swab testing.” They also referred to the Reuters article where they’ve debunked a similar claim. It stated that: Bill Gates foresees the use of “digital certificates” with health records, but did not say these would be in the form of microchip implants. There are no plans to use this future technology during the coronavirus outbreak.

When we scanned the profiled of the user we found that the user is based out of United States.

Conclusion: No, Gates Foundation is not planting microchips during COVID19 swab testing. Viral post is fake.