Fact Check: Post claiming HbA1C between 7 to 8 is normal is misleading 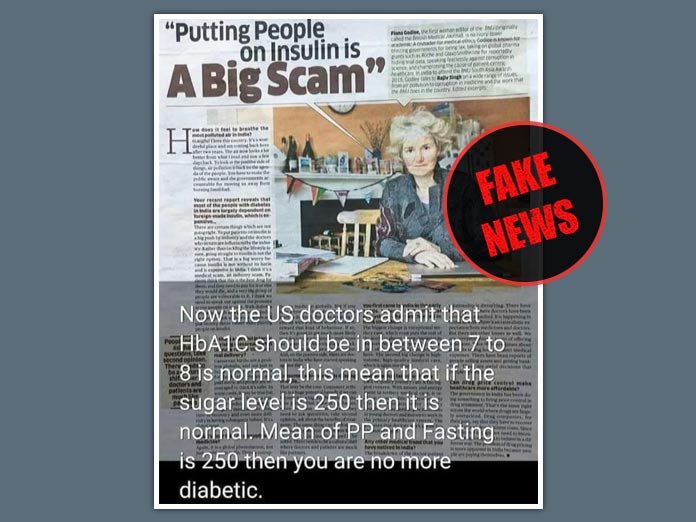 A post is getting viral across social media with a screenshot of an interview of a lady along with a caption. The caption in the photo states that “Now the US doctors admit that HbA1C should be in between 7 to 8 and is normal, this means that if the sugar level is 250 then it is within normal. The Mean value of PP and Fasting is 250 then you are no more diabetic.” Vishvas News team investigated on the matter and found that the claim is misleading.

The claim in the viral post reads: “The US doctors admit that HbA1C should be in between 7 to 8 and is normal, this means that if the sugar level is 250 then it is within normal. The mean value of PP and Fasting is 250 then you are no more diabetic.” The claim is accompanied by a screenshot of an interview of a lady.

We started our investigation by breaking down various elements of the claim.

What exactly is HbA1c?

As per diabetes.co.uk, the term HbA1c refers to glycated hemoglobin. It develops when hemoglobin, a protein within red blood cells that carries oxygen throughout your body, joins with glucose in the blood, becoming ‘glycated’.

By measuring glycated haemoglobin (HbA1c), clinicians are able to get an overall picture of what our average blood sugar levels have been over a period of weeks/months.

For people with diabetes this is important as the higher the HbA1c, the greater the risk of developing diabetes-related complications.

HbA1c is also referred to as haemoglobin A1c or simply A1c.

The hemoglobin A1c test tells you your average level of blood sugar over the past 2 to 3 months. It’s also called HbA1c.

We then searched the interview shown as a screenshot in the article. We found that the interview shown in the post is based on Fiona Godlee’s interview in economic times and was published on Nov 20, 2016, 10.09 AM IST. We read the entire interview and nowhere it was mentioned that HbA1C should be between 7 to 8 and is considered normal, or if the sugar level is 250 then it is within the normal range.

We read the entire interview and found that Fiona Godlee has stated that people suffering from diabetes should tackle the lifestyle issues, rather than going straight to insulin. She did not mention any numbers as stated in the viral claim. Here is the screenshot of her interview where she mentioned about the Insulin:

We further investigated by studying the ranges of hemoglobin A1c or simply A1c.

As per the American Diabetes Association, Diabetes is diagnosed at an A1C of greater than or equal to 6.5%. Which means that the viral claim stating that HbA1C should be in between 7 to 8 and is normal, is factually incorrect.

We looked upon the HbA1c figures on other websites as well.

As per WebMD, for people without diabetes, the normal range for the hemoglobin A1c level is between 4% and 5.6%.

According to diabetes.co.uk, H1bAc over 6.5% is diabetic:

As per U.S. National Library of Medicine, If you have diabetes, the American Diabetes Association recommends keeping your HbA1c levels below 7%.

We contacted Dr. G.K Khurana, Diabetics and Heart Clinic and he stated: “Diabetes is diagnosed at an A1C of greater than or equal to 6.5%.
HbA1C between 7 to 8 and is not normal. There are always ifs and buts. Medicine is not Mathematics. It will also depend on the age of the person. The sugar level of 250 is not normal.”

As per Dr. Sajeev Kumar, General Physician said: “Hemoglobin A1C levels of 6.5% or higher means you have diabetes.”

However, we landed to a report by Annals of Internal Medicine in which a guidance statement recommends that “Clinicians should aim to achieve an HbA1c level between 7% and 8% in most patients with type 2 diabetes.” It also recommends that “Clinicians should consider deintensifying pharmacologic therapy in patients with type 2 diabetes who achieve HbA1c levels less than 6.5%.” But, this is just a recommendation, US doctors have not admitted that HbA1C levels between 7% to 8% is normal.

“General recommendations like these are of limited value,” said Gary Scheiner, CDE, MS, Integrated Diabetes Services. “I believe this recommendation, in particular, fails to individualize care to the patient.”

“Many patients with type 2 diabetes can and should be aiming for tighter control than what is recommended here. Those at low risk of hypoglycemia but high risk of vascular complications would likely benefit from an A1C below 7 percent,” added Scheiner.

“In addition,” Scheiner warned, “the day-to-day function of the individual is affected greatly by glucose control, not just long-term health risks. Targeting higher glucose levels limits a person’s ability to perform optimally from a physical, intellectual, and emotional standpoint.”

This is just a recommendation. US doctors have not admitted as claimed in the viral post.

Post claiming HbA1C between 7 to 8 is normal is misleading. If the sugar level is 250 then it is not within the normal range. As per the recommendations published in Annals of Internal Medicine, clinicians should aim to achieve an HbA1c level between 7% and 8% in most patients with type 2 diabetes. But, it is just a recommendation. Doctors have not admitted on the numbers and the recommendations are facing backlash. American Diabetes Association, U.S. National Library of Medicine, WebMD and many other sources say that Diabetes is diagnosed at an A1C of greater than or equal to 6.5%. HbA1C between 7% to 8% and is not normal.