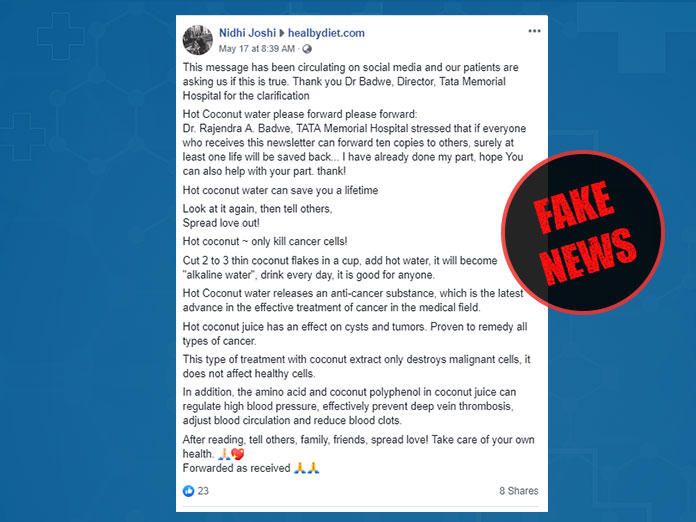 A Facebook post is getting viral in which it is claimed that hot coconut water can kill cancer cells. The post further claims that, hot coconut juice has an effect on cysts and tumors. The message has been attributed to Dr. Rajendra A. Badwe of TATA Memorial Hospital. Vishvas News investigated and found that the claim is false.

We started our investigation by breaking down various elements of the claim.

An article dated May 18, 2019, on timesofindia stated: The Tata Memorial Hospital statement on Thursday said the message was wrong as there was no scientific data to suggest that hot coconut water could cure cancer. Signed by Dr. Badwe, the message requested the public to not be misinformed by such harmful messages shared on social media.

We found another article dated May 17, 2019 by TheHindu that stated: Indian oncologists are increasingly battling unscientific miracle treatments for cancer shared widely on social media. On Thursday, Mumbai’s Tata Memorial Centre (TMC), the country’s premier cancer institute, issued a rebuttal on a strange cancer remedy attributed to them in a widely circulated WhatsApp message, which stated that hot coconut water can destroy cancer cells of all types.

“There is no data to suggest that hot coconut water can provide cures for any type of cancer. Public are requested not to be misinformed by such false and harmful messages sent on social media,” read a statement issued by the TMC’s director Dr. Rajendra Badwe.

An article dated May 18, 2019 on Hindustantimes read: The director of Tata Memorial Hospital (TMH), Parel, has not endorsed hot coconut water as a cure for cancer, the hospital stated through a notice issued on Friday.

The clarification came after a message, saying that the director had made such a claim, started circulating on social media.

“We would like to clarify to all concerned that this is a fake message and neither Dr [Rajendra] Badwe [the director] nor the TMH subscribe to this view. There is no data to suggest that hot coconut water can provide cure to any type of cancer. Public are requested not to be misinformed by false and harmful messages sent on social media,” read the notice.

On reading through the articles it was clarified that the director of Tata Memorial Hospital (TMH), Parel, has not endorsed hot coconut water as a cure for cancer.

The viral post also claims that coconut water is a proven remedy for all types of cancers. We further researched and found on Medical News Today, the hormones that help plants grow, also known as cytokinins, are also found in coconut water. These compounds are believed to have antiaging and cancer-fighting properties. However, to date no major studies have shown that coconut water wards off cancer.

The claim also states that add about 2 to 3 coconut flakes in a cup.. add hot water it will become alkaline water. Hot coconut water releases an anti-cancer substance.

We searched for any scientific study related to the same but could find any research.

This claim has been proven false by a cancer expert.

As per WebMd, Coconut water is commonly used as a beverage and as a solution for treating dehydration related to diarrhea or exercise. It is also tried for high blood pressure and to improve exercise performance.

Although Coconut water has certain health benefits, but it is certainly cannot be scientifically proven that hot coconut water can kill cancer cells.