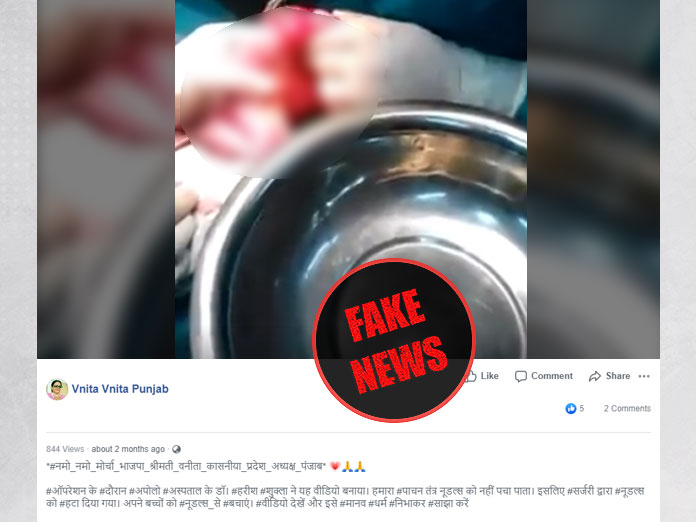 A visually disturbing video is doing rounds on social media claiming that noodles are being surgically removed from the intestines of a person. The caption in the viral video states that Dr. Harish Shukla of Apollo Hospital made this video. Vishvas News investigated and found that the viral claim is false.

A video is shared on Facebook by a user named Vnita Vnita Punjab. The video is shared with a caption that reads: ‘This video was made by Apollo Hospital’s doctor Harish Shukla during the operation. Our digestion system is not able to digest noodles. That’s why noodles were surgically removed from a patient. Protect your children from noodles. Please watch the video and share it for humanity’s sake.” This is not the first time such video has been shared. The video is viral across social media with different claims.

Vishvas News started its investigation by breaking down various elements of the viral post. We used InVid tool and performed reverse image search on the keyframes using Yandex search engine. This gave us a result which appears to be one of the oldest instances of the viral video.

The video was uploaded on August 24, 2015 by a channel of a Youtuber named Dr. Paresh Ruparel. The video was posted with a caption that said, “Multiple roundworms in the small intestine..surgical removal done..”

The same video was used with a different caption stating that roundworms were present in the small intestines which were surgically removed.

Vishvas News also contacted Dr. Sajeev Kumar, who is a General Physician. He said that “these are definitely not noodles. Noodles. When it comes to digestion, the process of digesting any food, starts way before it reaches intestines.”

The claim of the viral video stating that noodles are being surgically removed from the intestines of a person is fake.