Fact check: The Doctor in the viral claim arrested in Kidney racket, not for giving fake covid positive report 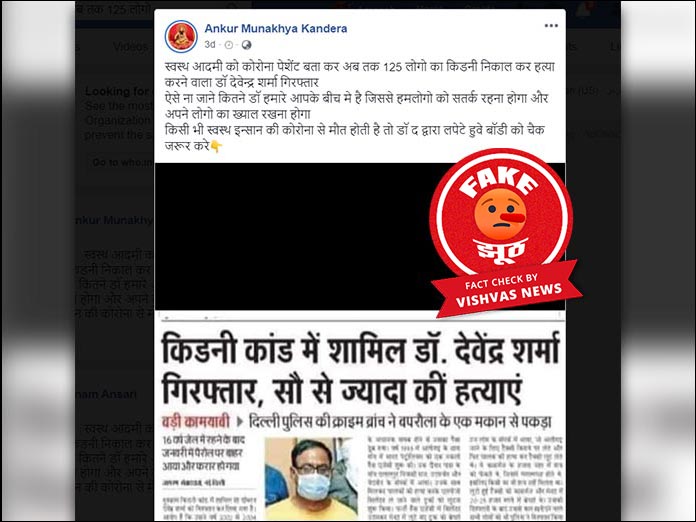 New Delhi (Vishvas Team). A viral post with a newspaper clipping relates coronavirus with a kidney racket. It claims that a doctor has been arrested for killing 125 patients on the pretext of covid-19 for kidney trade.

Vishvas News received the claim on Fact Checking WhatsApp chatbot (+91 95992 99372). Vishvas News investigation revealed the claim to be fake. We found that a news report on kidney transplant racket is viral with false claims linking to coronavirus.

The claim is viral on major social media platforms such as Facebook, Twitter and WhatsApp. Facebook user named Ankur Munakhya Kandera is one among the many users who shared the post is. It claims, “Dr. Devendra Sharma, who has killed around 125 people by taking their kidney has been arrested. This doctor used to tell a healthy person to be a corona patient…”
The things written in the post are written here as soon as possible. The archived version of this post can be accessed here.

Vishvas News searched for the news in the clipping shared with this post on Google with the necessary keywords. We received many authentic news reports. A report published by the Times of India on August 1 states that the doctor mentioned in the viral post was convicted for running a kidney racket. This news can be read in detail here .
During the search we also received a news report of Dainik Jagran. This report describes this incident in detail here .

This arrested doctor is a resident of Aligarh. We contacted Santosh Kumar Sharma, Chief Reporter of Dainik Jagran Aligarh to verify the information. He dismissed this claim and confirmed that the viral post is completely false. He said that the doctor was not arrested in giving fake coronavirus positive reports to healthy patients. “The doctor is convicted in kidney racket and other murder cases. He escaped after leaving parole. He was later found and arrested,” Sharma said.

Vishvas News did social scanning of the profile of Facebook user Ankur Munakhya Kandera who shared this post. This profile was created in February 2015. According to the information given on the profile, the user is a resident of Chandigarh.

Conclusion: The doctor was arrested for running a kidney racket. The claims shared on social media relating the incident to coronavirus is fake.