Fact Check: The post claiming that baking soda can cure cancer is fake 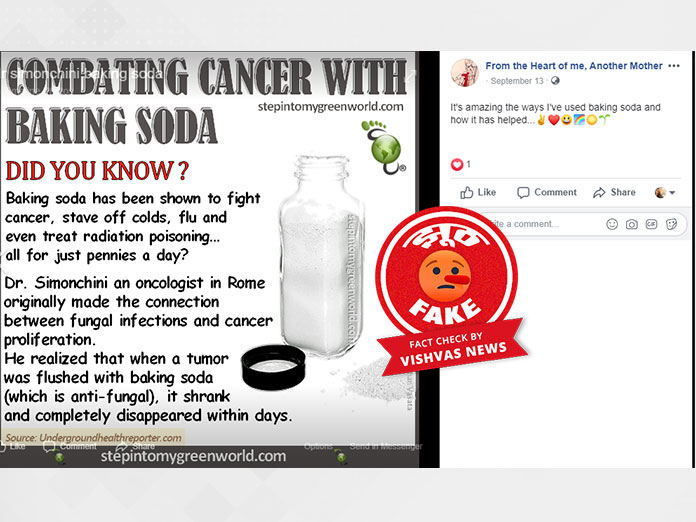 A viral post on social media claims that baking soda can cure cancer. The claim is attributed to Dr. Simonchini, an oncologist in Rome. As suggested in the post, Dr. Simonchini observed that a tumour got flushed with baking soda and was disappeared in a few days. Vishvas News investigated and found that the viral post is fake.

A viral post shared on Facebook by a user named ‘From the Heart of me, Another Mother’ reads: “Combating cancer with baking soda. Did you know? Baking soda has been shown to fight cancer, stave off colds, flu and even treat radiation poisoning… all for just pennies a day? Dr. Simonchini an oncologist in Rome originally made the connection between fungal infections and cancer proliferation. He realised that when a tumor was flushed with baking soda (which is anti-fungal), it shrank in completely disappeared within days.”

Vishvas news started its investigation by breaking down various elements of the viral claim. We started searching the claim whether baking soda can cure cancer. We found many users have shared this claim on social media.

We spoke to Dr. Manish Singhal, who is an Oncologist at Indraprastha Apollo Hospital. He said: There is no truth in the claim. Baking soda or bicarbonate is alkaline. The claim that baking soda cures cancer stems from cancer cells cannot survive in an alkaline medium. No matter how much bicarbonate you take, your kidney will flush out. The body’s natural pH is 7.35 to 7.45 and it will remain so. The body will maintain that forever unless something goes wrong drastically.”

The viral post also mentions Dr. Simonchini who is an oncologist in Rome. Digging the details of Dr. Simonchini, we found that his name is Dr. Tullio Simoncini. On the Wikipedia page of Dr. Simoncini we found a text that reads: “On his website, Simoncini says that he was formerly an oncologist but that designation has been challenged by the medical community because of his use of sodium bicarbonate in the treatment of cancer.”

As per the archived version of a webpage of Cancer.org, Sodium bicarbonate, also known as baking soda, is promoted by some alternative practitioners as a cancer treatment. This treatment is based on the theory that cancer is caused by a form of yeast infection and that sodium bicarbonate can kill the yeast. This claim is not supported by science or clinical evidence and is contrary to widely-accepted basic facts of oncology and microbiology.

There has been a study published on the official website of US National Library of Medicine, National Institute of Health which states that injecting bicarbonate in rats reduces the pH level of tumor and slows down metastatic breast cancer. But since this has been only tested on rats, and it cannot be deduced that baking soda alone cures cancer.

The post claiming that baking soda can cure cancer is fake.