Fact Check: The red dot eye test to check your vision is fake 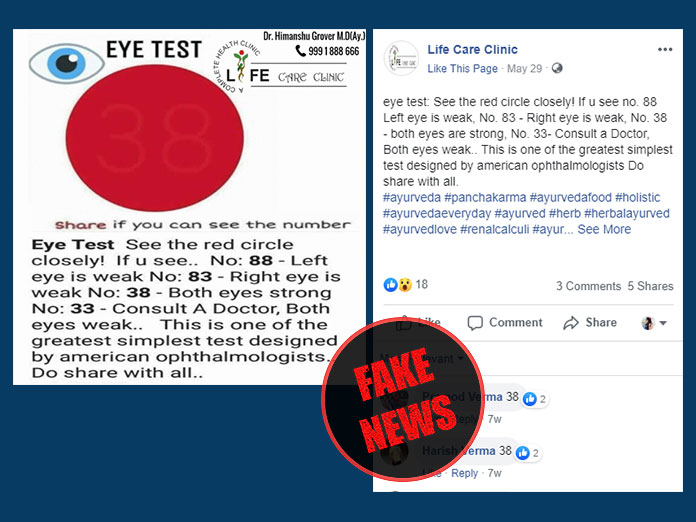 A message is getting viral on social media purporting to present the readers a simple eye test. A number can be seen inside a red dot and the visibility of the number allegedly decides the strength of your eyes. It is further mentioned that the test is designed by American ophthalmologists. The name and contact number of a doctor are also mentioned in the viral post. Vishvas News investigated and found that the claim is fake.

A post is getting viral on social media claiming it to be a simple eye test. A red dot is visible in the post with a number written on it. As per the claim, the visibility of the number allegedly decides the strength of the eyes. The post reads: “See the red circle closely! If u see no. 88 Left eye is weak, No. 83 – Right eye is weak, No. 38 – both eyes are strong, No. 33- Consult a Doctor, Both eyes weak. This is one of the greatest simplest test designed by American ophthalmologists.” The post is shared on Facebook by a page named Life Care Clinic. On the viral post, the name and number of Dr. Himanshu Grover were also mentioned.

Clearly, only the number 38 is visible on the red dot to everybody which means there was no question of an eye test as such.

Vishvas News contacted the number of Dr. Himashu Grover as mentioned on the viral post. He denied any such claim made by him.

We also contacted Dr. Rahil Chaudhary of Super Specialty Eye Hospital. He denied any such tests that are conducted to check eyes.

The viral post claiming that the visibility of the number in the red dot will decide the strength of your eyes is fake.