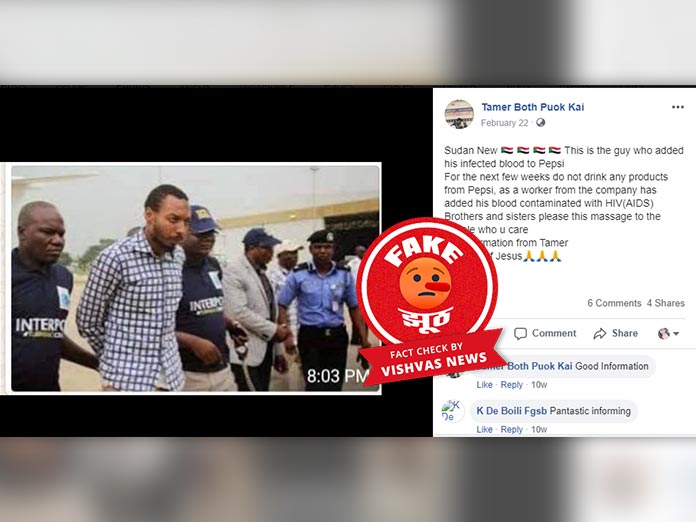 A post has resurfaced on Facebook in which a man can be seen with his hands tied and is identified as a worker from Pepsi. The claim alongside the post states that the man shown in the picture has added his HIV-infected blood to Pepsi. Also, the post warns people not to consume Pepsi for the next few weeks. Vishvas News investigated and found that the viral claim is false. Neither the man shown in the post is a worker from Pepsi nor the claim related to the HIV-contaminated Pepsi is true.

The post shared on Facebook reads: “This is the guy who added his infected blood to Pepsi. For the next few weeks do not drink any products from Pepsi, as a worker from the company has added his blood contaminated with HIV(AIDS). Brothers and sisters please this message to the people who u care.” The archived version of the post can be checked here.

Vishvas News investigated by searching the image of the man used in the viral post using Google Reverse Image tool.

The picture of the man featured in the post was that of Aminu Sadiq Ogwuche. He was the alleged mastermind of the Nyanya bomb attack in Nigeria’s Federal Capital. He wasn’t a Pepsi worker.

The Centers for Disease Control and Prevention (CDC) states: You can’t get HIV from consuming food handled by someone with HIV. Even if the food contained small amounts of HIV-infected blood or semen, exposure to the air, heat from cooking, and stomach acid would destroy the virus.

The complete fact check of the viral post can be read here.

We spoke to Yasmin Patel, an official from the Consumer Department of Pepsico. She said, “This news is circulating since many years. This is a hoax. Nothing as such happened in Pepsi.”

We performed the social scanning of the viral post and found that the user is based out of Sudan.

Conclusion: The viral post claiming that the man featured in the post added HIV-infected blood in pepsi is fake. Neither the man shown in the post is a worker from Pepsi nor the claim related to the HIV-contaminated Pepsi is true.