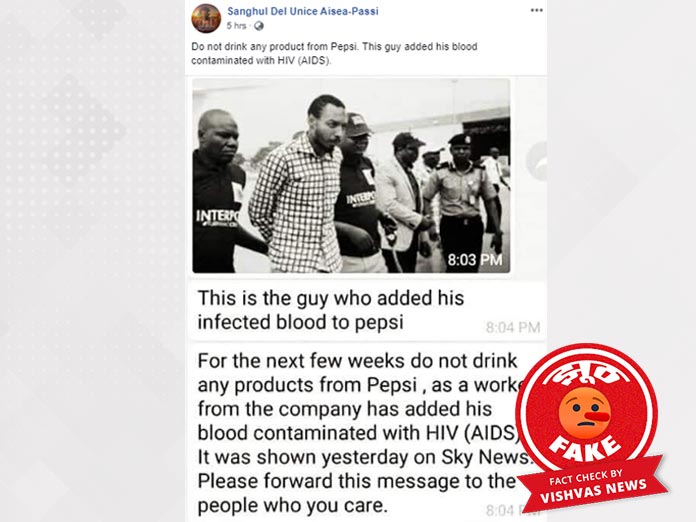 A message circulated on social media features a man with his hands tied and is identified as a worker from Pepsi. The viral claim supported by the picture states that the man shown in the picture has added his HIV-infected blood to Pepsi. The message also warns people not to consume Pepsi for the next few weeks. Vishvas News investigated and found that the viral claim is false. Neither the man shown in the post is a worker from Pepsi nor the claim related to the HIV-contaminated Pepsi is true.

The message circulated across social media features a man with his hands tied. The message reads: This is the guy who added his infected blood to Pepsi. For the next few weeks do not drink Pepsi, as a worker from the company has added his blood contaminated with HIV (AIDS). It was shown yesterday on Sky News. Please forward this message to the people you care.

Vishvas News started its investigation by breaking down various elements of the viral claim. We first investigated on the photo of the man featured in the post.

We cropped the photo of the man using snipping tool and performed Google reverse image search of the photo.

While searching through various reports published online we found that the picture of the man featured on the viral post was that of Aminu Sadiq Ogwuche, the alleged mastermind of the Nyanya bomb attack in Nigeria’s Federal Capital. The photo was taken in July 2014 when the alleged mastermind arrived in a Nigeria Air Force aircraft and was handed over to operatives of the Department of State Security (DSS) and Nigeria’s Interpol.

We also found various news reports related to the incident. Here are some examples:

These reports prove that the photo of the man featured in the viral post is that of the alleged mastermind of the Nyanya bomb attack in Nigeria’s Federal Capital and not of a worker in Pepsi.

The post is accompanied by a text that claimed that the guy featured in the image added his HIV-infected blood to Pepsi.

We spoke to Yasmin Patel, Consumer Department, Pepsico. She said, “This news is circulating since many years. This is a hoax. Nothing as such happened in Pepsi.”

The post also claims Sky News aired a segment on the Pepsi warning. We did not find any news report pertaining to this on its website.

On the official website of Centers for Disease Control and Prevention, we searched whether HIV can be transmitted from food. We found a report that stated: You can’t get HIV from consuming food handled by someone with HIV. Even if the food contained small amounts of HIV-infected blood or semen, exposure to the air, heat from cooking, and stomach acid would destroy the virus.

We found another report on the official website of World Health Organisation (WHO) that stated: HIV can be transmitted via the exchange of a variety of body fluids from infected individuals, such as blood, breast milk, semen, and vaginal secretions. Individuals cannot become infected through ordinary day-to-day contact such as kissing, hugging, shaking hands, or sharing personal objects, food or water.

Similar hoax pieces were shared earlier as well. Where the same picture of the man was used. The post claimed that Cadbury products have been contaminated with HIV.

Vishvas News investigated and found that the viral claim is false. Neither the man shown in the post is a worker from Pepsi nor the claim related to the HIV-contaminated Pepsi is true.