Fact Check: 2015 incident of Raj Thackeray’s wife being bitten by own dog goes viral as recent

Vishvas News in its investigation found out that 2015 incident of Raj Thackeray’s wife being bitten by own dog is going viral as recent. The post is misleading. 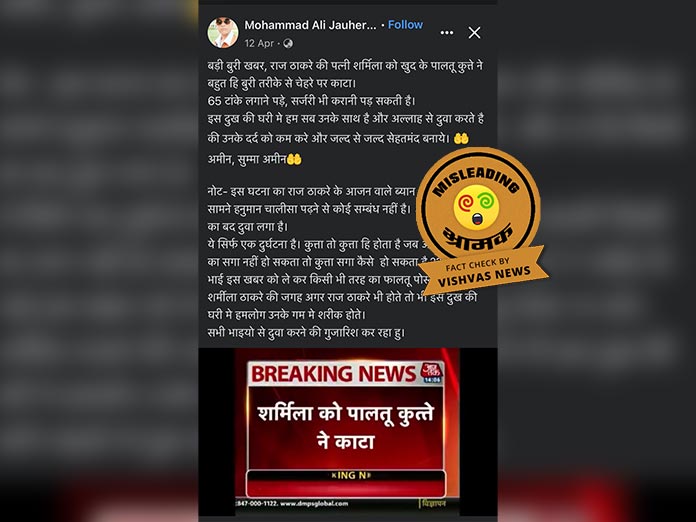 New Delhi (Vishvas News): Vishvas News came across a post where a video is being shared, which shows a clipping of Aaj Tak news report being widely shared on social media stating that Maharashtra Navnirman Sena (MNS) chief Raj Thackeray’s wife was recently bitten by their own pet dog leading to 65 stitches. It is further being claimed that the dog was upset due to statements of Raj Thackeray on recent loudspeaker row.

Vishvas News in its investigation found that this is an incident from 2015 and not recent.

Translation: Big bad news, Raj Thackeray’s wife Sharmila was badly bitten in the face by her own pet dog. 65 stitches were required, surgery may also have to be done. We are all with them in this time of sorrow and pray to Allah to ease their pain and make them healthy as soon as possible. Amin, Summa Amin🤲 Note- This incident has nothing to do with Raj Thackeray’s statement on Azaan and reading Hanuman Chalisa in front of the mosque. This is just an accident. A dog is a dog when a man cannot be with anyone, how can a dog be close to anyone? No brother should post any kind of useless post regarding this news. Even if Raj Thackeray had been in place of Sharmila Thackeray, we would have shared his sorrow in this house of sorrow. I am requesting all the brothers to connect.

Other users too have shared the video of same claim.

Vishvas News started its investigation with a simple keyword search and came across numerous news reports about the same.

The report also said, “Sharmila had to undergo a surgery on Tuesday and is now recovering in Mumbai’s Hinduja hospital.”

We also came across a news report by Zee News titled: Why did ‘Bond’ bite Raj Thackeray’s wife Sharmila?

The report dated, Aug 20 2015, also mentioned: As per the Mumbai Mirror report, Sharmila was attacked after she accidentally stepped on the dog.

This was now clear that the report was not recent but rather belonged to August 2015.

Vishvas News also came across a report from December 26, 2018, titled: Raj Thackeray’s pet dog Bond, who had bitten his wife on the face in August 2015, dies

We also found a video of the dog’s funeral on the channel, TV9 Bharatvarsh.

It was now clear that the incident is not recent, the dog bit MNS chief’s wife in 2015 and the pet dog died in 2018, this was clear from the evidences that Vishvas News gathered till now.

In the next step of verification, Vishvas News reached out to Shalini Thackeray, general secretary of Maharashtra Navnirman Sena. She informed that this incident happened in 2015 when, the dog was sleeping and Raj Thackeray’s wife was unaware of his presence happened to step beside him. The startled dog then bit Sharmila, leading to a minor surgery. She also mentioned that the incident is old and it is inappropriate to share such incident which is not even related to the current row. She also informed that the dog died a few years later.

In the last step of investigation, Vishvas News conducted a social background check of the Facebook user, page Mohammad Ali Jauher Siddique is being followed by 10,000 followers.

Conclusion: Vishvas News in its investigation found out that 2015 incident of Raj Thackeray’s wife being bitten by own dog is going viral as recent. The post is misleading.