The viral post is misleading. Two year old image of left front rally in Kolkata is passed off as from recent rally on 28 February. 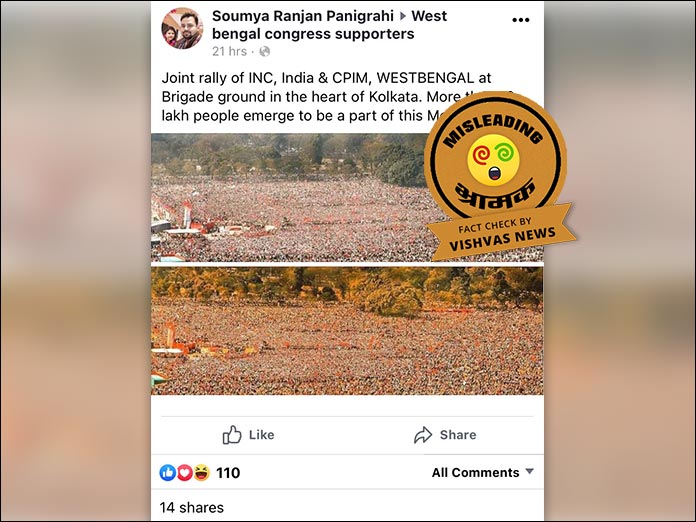 New Delhi ( Vishvas News). A viral post with picture of a massive crowd is shared with a claim that it is from West Bengal rally at Brigade on 28 February where people have gathered to expressed their anger towards the ruling party.

A viral post with picture of huge gathering is shared writing, “Joint Election Rally by @INCIndia & @CPIM_WESTBENGAL at brigade ground in Kolkata.” The archived version of the viral post can be seen here.

Saral Patel, Congress National Convener has also tweeted the pictures with similar claims stating this shows the anger of people in West Bengal.

The Left-Congress-ISF alliance kicked off their campaign for the 2021 West Bengal Assembly Elections on Sunday with a mega rally at Kolkata’s famed Brigade Parade Ground. The venue has been popularised by the state’s Left Front for hosting massive rallies over the years, stated an article in the Hindustan Times.

We observed the viral post and identified that both images are identical, but has different filters.

We searched for the source of the image using Google reverse image search tool and found it on a website with caption describing, “Kolkata Workers of leftist parties participate in a Left Front rally at the Brigade Parade ground in Kolkata on 3 Feb 2019. Photo: IANS.”

We also found the image in an article published in February 2019 with similar description.

Vishvas News contacted Dainik Jagran’s Kolkata bureau Chief JK Vajpayee for verification. Sharing to us the original picture of the rally, he said, “The picture in the posts are from 2019 rally.”

Social scanning of the user who sheared the viral post revealed that he is from Kolkata. He has 932 followers on Facebook and is active since October 2010.

Conclusion: The viral post is misleading. Two year old image of left front rally in Kolkata is passed off as from recent rally on 28 February.