Vishvas News investigated the viral image and found that the image is almost 4 month old. The viral picture is from the birthday of Aparna Yadav’s mother-in-law Sadhana in September last year. 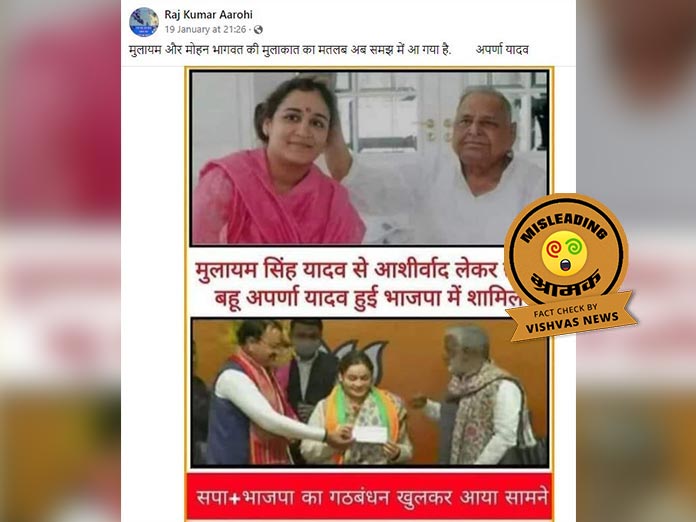 Vishvas News used Google reverse image search to investigate the post. We found the viral picture on Aparna Yadav’s official Twitter account. Aparna Yadav shared some other pictures on her Twitter including the viral picture of her mother-in-law Sadhna’s birthday on September 1st, 2021. In the original picture, there is also a small girl with Mulayam Singh Yadav and Aparna Yadav (that has been edited and removed in the viral post).

During the investigation, we also found the picture on the official Facebook page of Aparna Yadav. Here too, pictures have been shared with the same information.

In order to investigate further, we contacted Shobhit Srivastava, Special Correspondent from Dainik Jagran Lucknow. We shared the viral picture with him via WhatsApp. He told us that the viral claim is false. He said: “this picture is several months old. After joining BJP, she had definitely said that I have brought the blessings of all the elders, but no picture of this was revealed.” He further told us that Aparna Yadav had reached today to seek the blessings of Mulayam Singh Yadav and he also shared the pictures with us.

At the end of the investigation, we did social scanning of the Facebook user Raj Kumar Aarohi who shared this post. From scanning, we came to know that the user is influenced by a particular ideology. Raj Kumar Aarohi has about 5000 friends on Facebook.

Conclusion: Vishvas News investigated the viral image and found that the image is almost 4 month old. The viral picture is from the birthday of Aparna Yadav’s mother-in-law Sadhana in September last year.