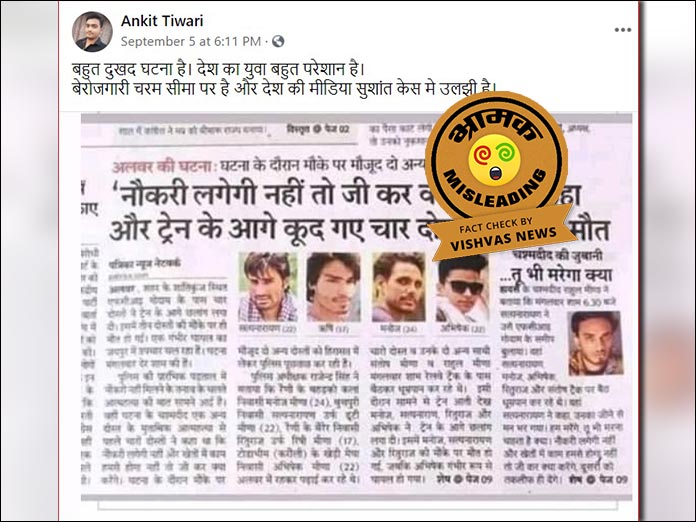 New Delhi (Vishvas News). A viral post with a newspaper clipping of a suicide incident due to unemployment is shared as a recent incident. The user allegedly blames media for reporting on Sushant case while unemployment is at peak in the country.

Vishvas News investigation revealed the claim is misleading. The newspaper clipping of old suicide incident that happened in 2018 is viral now.

Facebook user Ankit Tiwari, while uploading a newspaper clipping on 5 September, wrote: “Very sad incident. The youth of the country are very upset. Unemployment is at its peak and the country’s media is obsessed in the Sushant case.”

The  archived version of the viral post  can be seen here.

We observed the news clipping. We could identify that the incident is from Alwar in Rajasthan. This news is a clipping of Rajasthan Patrika. We searched in Google using keywords and we accessed the first link from patrika.com. We found the same news published on 21 November 2018 in their website. According to the news, four youths jumped in front of a train in Alwar.

We also found this news on Zee News website. We found the same four pictures from the newspaper clipping on the article published on 22 November 2018.

We contacted Narendra Sharma, Dainik Jagran’s Jaipur incharge to verify this claim. “This is not a recent. This case is of 2018,” said Sharma.

Social scanning of the user who shared the viral post revealed that he is from Gonda in UP.

Conclusion: The viral post is misleading. The suicide incident happened in November 2018 is now viral.