CNN did not carry the article of an obese woman blaming unvaccinated for her death due to Covid. Viral image is edited and fake. 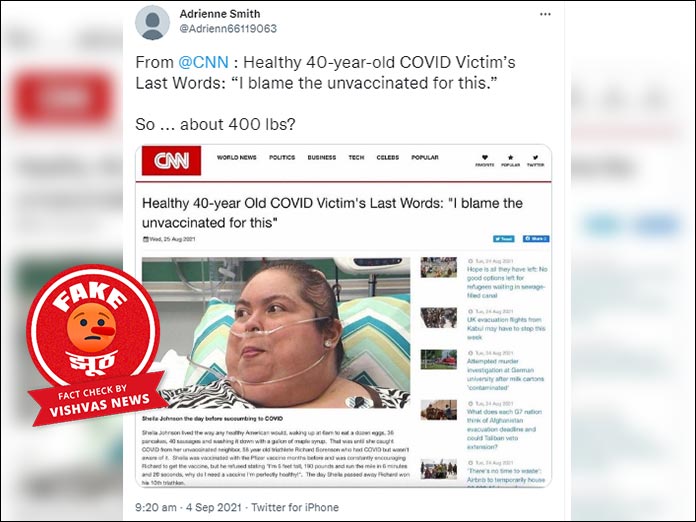 New Delhi (Vishvas News): Vishvas News spotted an image of an article attributed to CNN. The image looked like a screenshot from the website. The article was titled, ‘Healthy 40-year old Covid victim’s last words: “I blame the unvaccinated for this”. Vishvas News in its investigation found that CNN had not carried any such article on its website and neither has the victim blamed unvaccinated for her Covid death.

Claim:
Twitter User Adrienne Smith shared the viral image on September 4 and wrote: From @CNN: Healthy 40-year-old COVID Victim’s Last Words: “I blame the unvaccinated for this.” So … about 400 lbs?

Vishvas News started the investigation by observing the image of the article.

The article was published on 25 Aug, 2021, Wednesday. And the contents of the article looked like a piece of satire. The article stated: Sheila Johnson the day before succumbing to COVID Sheila Johnson lived the way any healthy American would, waking up at 6am to eat a dozen eggs, 36 pancakes, 40 sausages and washing it down with a gallon of maple syrup. That was until she caught COVID from her unvaccinated neighbor, 58 year old triathlete Richard Sorenson who had COVID but wasn’t aware of it. Sheila was vaccinated with the Pfizer vaccine months before and was constantly encouraging Richard to get the vaccine, but he refused stating “I’m 8 feet tall, 190 pounds and run the mile in 6 minutes and 20 seconds, why do I need a vaccine I’m perfectly healthy!”. The day Sheila passed away Richard won his 10th triathlon.”

This clearly did not look like a serious article.

Vishvas News then tried to find out the identity of woman in the image. This lead us to an article on looper.com, which had the image of the lady. However, it was found out that the lady was not Sheila but, Cindy Vela, from TLC’s medical reality series, ‘My 600-lb Life’.

This was hence clear that the article was edited with her image on it.

Vishvas News then reached out to Matt Dornic, head of Strategic Communications at CNN. He said, “It appears to be a distasteful attempt at satire. That article was never published on any CNN platform.“

In the last step of investigation, Vishvas News checked the profile of the person who had shared the article, Adrienne Smith joined Twitter in December 2018. User has 323 followers and follows 720.

Conclusion: CNN did not carry the article of an obese woman blaming unvaccinated for her death due to Covid. Viral image is edited and fake.