The viral claim turned out to be false in the investigation of Vishvas News. Viral picture of Australian PM Anthony Albanese from a function organised by Hindus. Which is now being shared with a misleading claim. 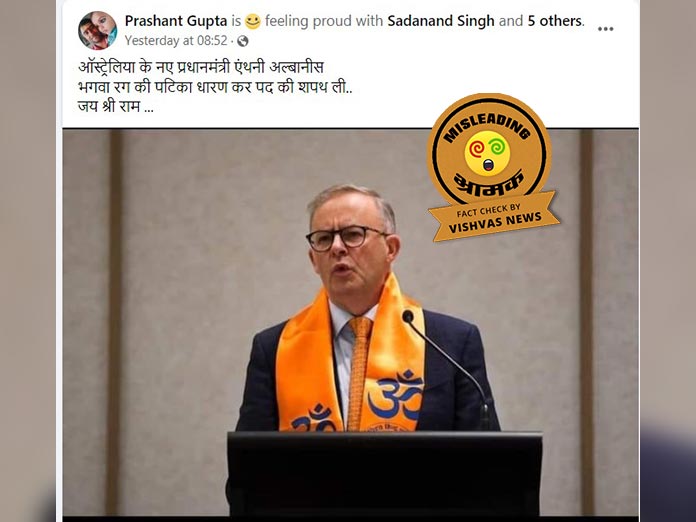 New Delhi (Vishvas News): A picture of Australia’s PM Anthony Albanese is being shared widely on social media with the claim that he took the oath by wearing a saffron scarf, which had written ‘Om’. The viral claim turned out to be fake in the investigation conducted by Vishvas News. This viral picture is from Australian PM Anthony Albanese from a function organised by Hindus, which is now being shared with a misleading claims.

To know the truth of the viral picture, we searched the photo through Google Reverse Image. During this, we found a report related to the viral claim published on The Guardian’s website on 14 May 2022. According to the information given in the report, the viral picture was taken during a function organised by Hindus in the Parramatta area of ​​Australia. At that time, Anthony Albanese was not the PM, but the leader of the opposition. ABC News also published this news.

We found a tweet related to the viral image posted on the official Twitter account of Anthony Albanese on 6 May 2022. Sharing some photos of the ceremony, Anthony Albanese wrote in the caption, “A warm reception in Parramatta tonight with leaders from the Hindu faith and subcontinental communities.”

Taking the investigation forward, we started searching about Anthony Albanese’s Oath ceremony. We found the video of the oath ceremony on 9 News Australia uploaded on 23 May 2022. It can be clearly seen in the video, he is not wearing a saffron scarf.

We contacted a freelance journalist from Australia for more information. He told us the viral claim is false. This photo is from before Anthony Albanese became Prime Minister. A few weeks before he took the oath for PM , he attended an event organised by Hindus. This picture was taken there. He was not wearing a saffron scarf at the time of oath.

Vishvas News, in the last phase of the investigation, conducted a background check on the profile that shared the viral post. We found that 797 people follow the user. Prashant Gupta is a resident of Bihar.

Conclusion: The viral claim turned out to be false in the investigation of Vishvas News. Viral picture of Australian PM Anthony Albanese from a function organised by Hindus. Which is now being shared with a misleading claim.