Fact Check: Azam Khan’s statement from 5 years ago being shared in wrong context

In the investigation of Vishvas News, the claim being made about Azam Khan’s viral video turned out to be misleading. The video is not recent, but from the year 2017. 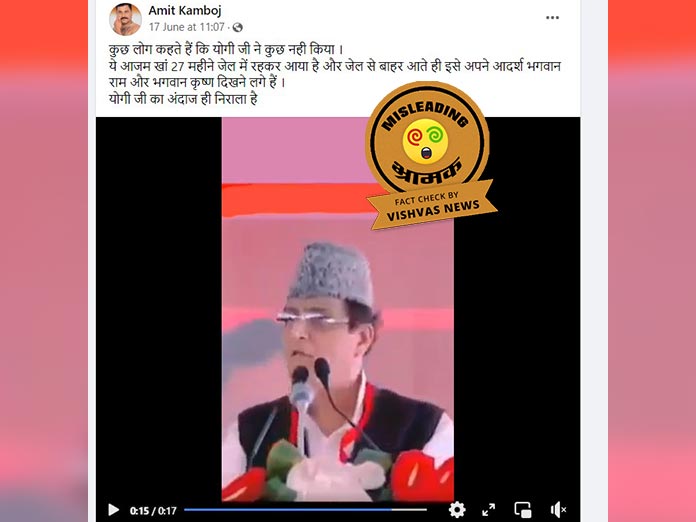 New Delhi (Vishvas News): A video of Samajwadi Party leader Azam Khan is going viral on social media. In the video, Azam Khan is saying, “Yogi ji Mughal is not our ideal, our idols are Ram and Krishna ji.” It is being claimed that Azam Khan has given this statement after his release from jail. The viral claim turned out to be misleading in the investigation of Vishvas News. The video is not recent, but from the year 2017. Which is now being shared with the wrong claim.

Facebook user Amit Kamboj shared this video and wrote (Archive Version), “Some people say that Yogi ji did nothing. This Azam Khan has come after staying in jail for 27 months and as soon as he comes out of jail, he has started seeing his ideals in Lord Rama and Lord Krishna. Yogi ji’s style is unique.

To know the truth of the viral video, we started searching on Google using several keywords. We found the original video uploaded on the official YouTube channel of Samajwadi Party. It was uploaded on 7 October 2017. According to the information given in the description, the viral video was made in the year 2017 during an event in Agra.

After watching the original video, we found that the viral video is cropped. In the original video, Azam khan said, “The Quran and the Prophet have said that do not insult anyone’s religious Peshwa or great men of any religion, because Allah sent 1,20,000 prophets to the Earth and there were all the great men in the world. He may have been a prophet of his time, a messenger of Allah. That’s why Yogi Ji, Mughal is not our ideal, but Ram and Krishna are our ideals, but we want to know whether the Prophet and Jesus Christ are your ideals or not. let us know.” In the original video, Azam Khan’s entire statement can be heard from 13 minutes 16 seconds to 16 minutes 11 seconds.

During investigation, we found a media report related to the viral claim on the ABP News website. It was published on 5 October 2017. Here too the same information has been given about the viral video.

For more information, we contacted Rajeev Sharma, chief reporter of Agra Dainik Jagran. He told us the viral claim is false. This video is almost 5 years old and edited. Azam Khan made this statement in the programme organised during the 10th National Convention of the Samajwadi Party.

At the end of the investigation, we checked the user’s profile who shared the claim. We found out Amit Kamboj has 4939 friends on Facebook. According to the information given on the profile, the user is a resident of Haryana.

Conclusion: In the investigation of Vishvas News, the claim being made about Azam Khan’s viral video turned out to be misleading. The video is not recent, but from the year 2017.