Fact Check: BJP TN leader Murugan did not give this statement on revoking farm laws, viral claim is fake

The viral post is fake. The graphic plate has been edited and shared with fake claim. 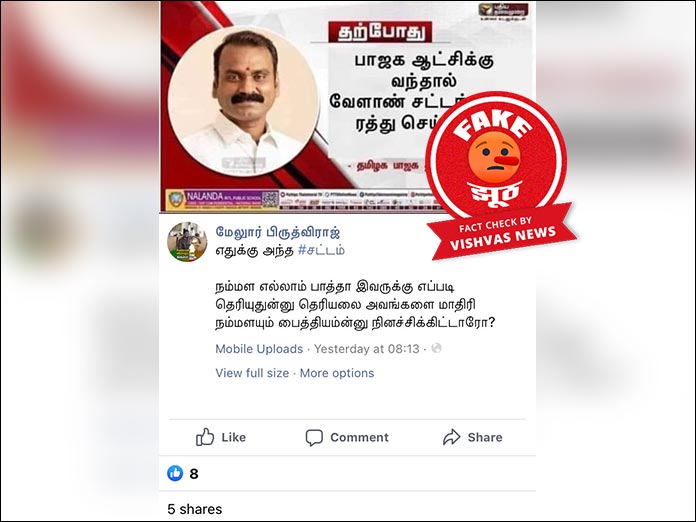 A viral graphic plate of Puthiyathalaimurai allegedly quoted the state BJP leader L Murugan promising to revoke farm laws if the party comes to power. The archived version of the post can be seen here.

Addressing a party conference in Dharmapuri, BJP State president L Murugan on Saturday said that the BJP’s momentum was picking up in Tamil Nadu, with the people abandoning their previous political affiliations, according to an article in the New Indian Express.

Murugan charged the DMK with indulging in a misinformation campaign on farm laws. Addressing a meeting of the party’s office-bearers and leaders of various wings at Alangayam in Tirupattur district, he said, “MK Stalin has been indulging in misinformation campaign on farm laws. He is playing a double game on the issue. Farmers should realise this.” While this has been the most recent about him, we did not find any authentic reports confirming the viral claim.

Vishvas News contacted Manoj Prabakar, Chief of Puthiyathalaimurai Web team for verification. “This is fake. We did not run any such news. The title card has been edited,” he said.

Social scanning of the FB user who shared the viral post revealed that he lives in Karur, Tamil Nadu.

Conclusion: The viral post is fake. The graphic plate has been edited and shared with fake claim.