Fact Check: Bollywood actress Kangana Ranaut is not campaigning for BJP in Bihar, the viral claim is fake 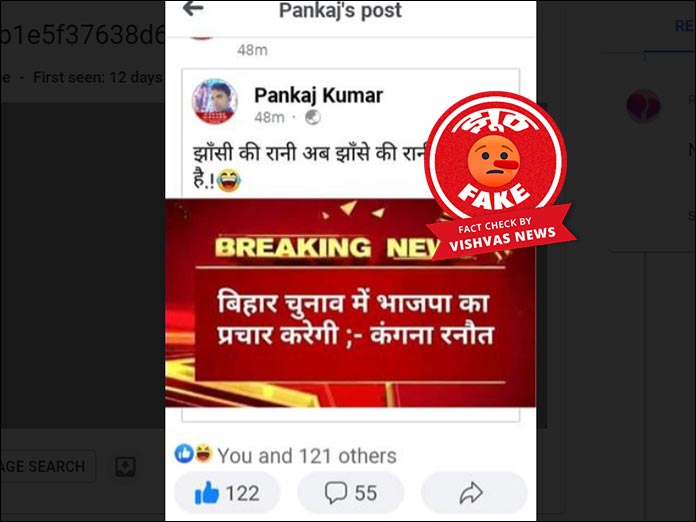 New Delhi (Vishvas News): A viral post on social media claims that bollywood actress Kangana Ranaut will campaign for BJP in Bihar elections. The claim is shared on a graphic plate allegedly of the ABP News.

We received it for fact checking on its WhatsApp chatbot (+91 95992 99372).  Vishvas News investigation revealed the claim is fake. BJP had denied allegations about Kangana’s campaigning for the upcoming assembly elections in Bihar.

A viral post allegedly in an ABP graphic claims that Bollywood actress Kangana Ranaut will campaign for the BJP in the upcoming Bihar elections. The archived version of the tweet can be seen here.

We searched the Internet with the help of keywords to find whether ABP News published any such news. We did not find any information on the ABP website. However we found reports about Devendra Fadnavis, BJP’s Bihar election in-charge, denying the claims about Ranaut’s campaigning. One such news report published in Live Hindustan can be seen here .

We did not find any authentic reports that confirmed Ranaut campaigning for the BJP.

This difference between the fake plate and the original ABP graphic plate taken from the video on ABP’s official YouTube channel can be seen in the photo below.

Vishvas News approached the editorial department of ABP News to verify the claim. He told that this is a fake graphic plate and is not of ABP’s graphic plate.

Twitter Handle Team Haq Ki Awaaz posted this viral claim and social scanning of the profile revealed that the account was created in September 2020 and has 116 followers.

Conclusion: The viral claim is fake. The BJP has denied claims about Kangana campaigning for the upcoming assembly elections in Bihar.