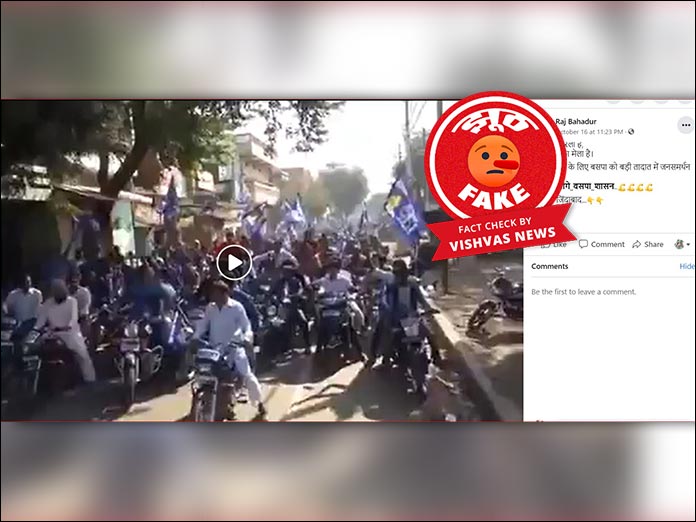 New Delhi (Vishvas News). A video of a bike rally is viral with a claim that it is from Bahujan Samaj Party’s (BSP) rally in Bihar amid the assembly elections.

Vishvas News investigation revealed the viral claim is fake. The old video of 2016 rally organized by the BSP in Jhansi, Uttar Pradesh is now viral with fake claim.

Facebook user Raj Bahadur uploaded a video on October 16, writing, “…The BSP is getting a lot of public support for the Bihar elections…”

We first observed the viral video and identified that it is old as the quality of the video was quite poor. We could notice that nobody in the video has worn a facemask in the pandemic season. We searched on the Internet for the original video using keywords on YouTube. We found this video uploaded by YouTube user Lalit kushwaha on 31 December 2016 titled, ‘Memorable bike rally jhansi sitaram Kushwaha b.s.p candidate- shooted lalit kushwaha’.

We contacted Kushwaha to verify the claim. He told us that he captured the bike rally video organized by the BSP in December 2016 as his uncle Sitaram Kushwaha contested from Jhansi Assembly (223). “The video is old. The BSP organized a district level conference and a bike rally in Jhansi, Uttar Pradesh,” he said.

Social scanning of the user who shared the viral claim revealed that he is a student from Patna.

Conclusion: The viral post is fake. The bike rally video is from 2016 in Jhansi and not from Bihar as shared in the viral post.