Fact Check: Claim that Guwahati police is picking night wanderers and dropping them at city borders is false

Vishvas News investigated and found that the post is fake. Guwahati Police have not taken any steps this. 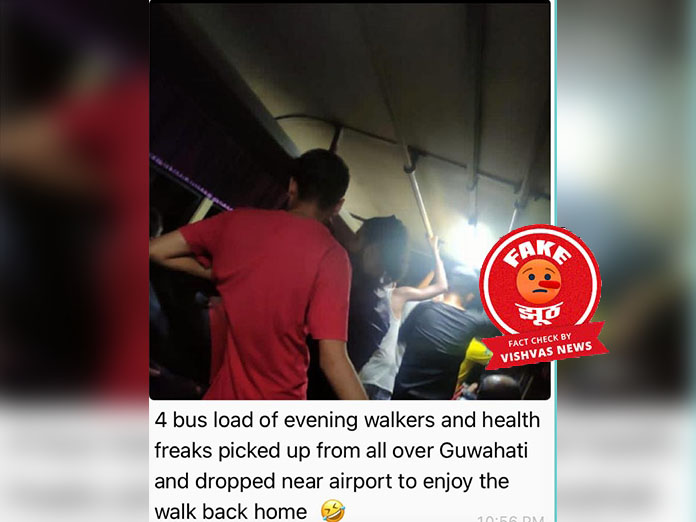 Guwahati (Vishvas News): A post is going viral on social media with the claim that Assam Police picked people who came out for evening walk and released them near Airport (Azara) 15-20 km away, while curfew was going on in Guwahati.

Vishvas News investigated and found the claim to be fake. It is true that Guwahati police is very strictly handling night curfew, and many night wanderers have been taken into custody. But Guwahati Police have not picked people who came out for evening walk and released them near Airport (Azara) 15-20 km away.

Parties and Events in Guwahati, a popular Facebook page in Guwahati, uploaded a photo on July 18. The description along with the photo read: ‘4 bus load of evening walkers picked up from all over Guwahati and dropped near the airport to enjoy the walk back home.’

Vishvas News first checked this viral photo thoroughly. Some people are seen standing inside a vehicle here. No one’s face is clearly visible as the photo is taken from behind. Vishvas News then took to the internet and searched this image on Google Reverse Image. We did not get information about this photo.

We contacted the Deputy Commissioner of Police, Guwahati Traffic Police, Mr. Pranjeet Bora. The police officer told Vishvas News, “Assam Police hasn’t taken any such step yet and the news is completely fake.” He added, “It is true that Assam Police have brought some people to the Police Stations, who broke the Curfew Law, but we have never taken people from Guwahati to Azara. This news is fake”.

Advancing the investigation, Vishvas News contacted Barasha Das, senior reporter of GPlus, an English weekly newspaper published from Guwahati. Barasha Said, “We have also received this news, but it is completely fake news.” She added, “The fact that Guwahati Police picked up people like this and left them in Azara is false. The news has been seen circulating on some social media as well as Whatsapp. ”

It may be mentioned that we also contacted Azara police station in-charge Tapan Kalita as the post says that people were dropped at Azara area.  He told us, “No such bus has come to Azara so far. And we would have known that if Assam police would have taken any such step. This viral news is fake.” Finally, we did a background check about the Facebook Page that shared this viral image. Parties and Events in Guwahati is followed by 126,914 people, liked by 98610. The viral image has been shared by 385 people until this fact-check.

Conclusion: Vishvas News investigated and found that the post is fake. Guwahati Police have not taken any steps this.