Fact Check: Claims About Journalist Pragya Mishra Who Questioned Kumbh During Coronavirus Are Fake; Video of Another Incident Viral With Fake Claim 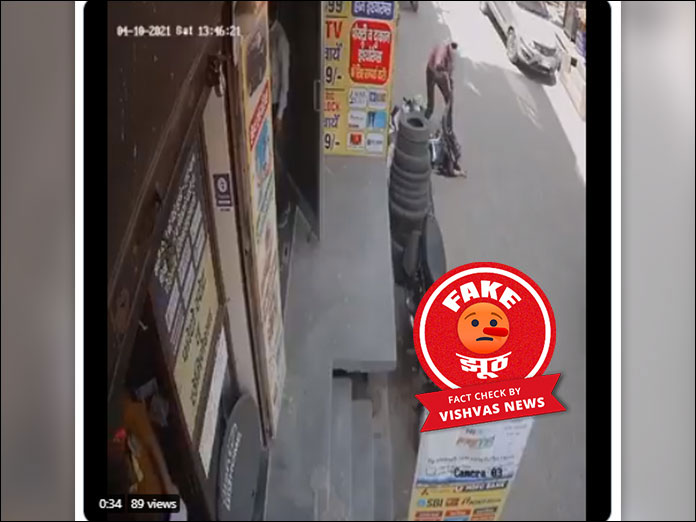 Vishvas News (New Delhi): In a video going viral on social media, a man can be seen attacking a woman. Social media users are claiming that the woman seen in the video is Pragya Mishra, a female journalist, who was killed for questioning the Kumbh Mela during the Coronavirus. Vishvas News investigated and found the claim to be false. The video earlier went viral with a communal claim. The video of a criminal incident in Delhi is viral with a fake claim.

Vishvas News found out a man publicly killed his wife in Rohini, Delhi. The CCTV footage of the same incident went viral on social media with false claims.

Twitter user Sharif Afridi tweeted on April 18, 2021, with CCTV footage, ‘Pragya Mishra was killed in broad daylight in India as she was talking about the Kumbh Mela during the Coronavirus era in the news.’

The archived version of this tweet can be viewed by clicking here.

Vishvas News started its investigation using the InVID tool. We extracted the keyframes of viral video and performed Google reverse image search on them. We found a YouTube channel named Life is Beautiful Yours Sharmila, where the viral video has been uploaded on April 12, 2021. According to its description, the case is from Rohini, Delhi. It states that an accused named Harish Mehta stabbed his wife Neelu to death with a knife.

We also found a report published on India Today’s website dated April 10, 2021. In this report as well, the screengrab of the viral video has been used. The report also mentioned the name of accused Harish Mehta, who killed his wife Neelu Mehta with a knife. We also found a mention of this incident in the report published on the website of Dainik Jagran dated April 10, 2021. Also, in a report published on the website of Hindustan Times on April 11, 2021, it was stated that a husband killed his wife in suspicion of an affair. Later, two constables of the Vijay Vihar police caught the accused.

Vishvas News investigated different claims related to this viral video. Earlier, it was claimed that the woman was killed for allegedly opposing Love Jihad. We also shared this video with the Vijay Vihar police of Delhi for investigation. They said that there is no communal angle in the matter. The Fact Check story done can be read here.

Vishvas News also collected information regarding the journalist Pragya Mishra. We found a live video shared on her Facebook account on April 18, 2021. Pragya Mishra, in a live video, denied the ongoing viral rumor against her. This video can be seen by clicking here.

Vishvas News directly contacted Pragya Mishra regarding the viral video. She said that thousands of people tried to contact her because of the viral video. She is alive. Pragya Mishra told us that such incidents are happening in front of people and people are mute spectators on the streets, this is a very serious matter. She confirmed to Vishvas News that she is doing fine.

Vishvas News scanned the profile of Twitter user Sharif Afridi who tweeted the video with the fake claim. We found that the user is based out of Peshawar, Pakistan.

Conclusion: In the investigation of Vishvas News, the claim regarding viral video and journalist Pragya Mishra has turned out to be fake. The video earlier went viral with a communal claim. The video of a criminal incident in Delhi is viral with a fake claim. Vishvas News found out a man publicly killed his wife in Rohini, Delhi. The CCTV footage of the same incident went viral on social media with false claims.