Vishvas News in its investigation found that the video of CM Yogi Adityanath going viral as recent is old and the claim is misleading. An old video is being shared with connection to Nupur Sharma case 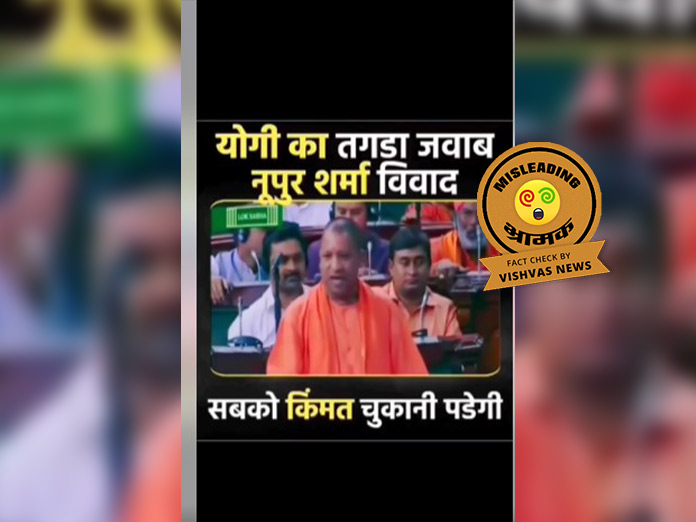 New Delhi (Vishvas News): A video of Uttar Pradesh Chief Minister Yogi Adityanath is going viral on social media, which is being shared by linking it to the recent Nupur Sharma case. In the video, CM Yogi is seen speaking on communalism. Social media users are claiming that this statement of Yogi Adityanath has come out in support of Nupur Sharma. On investigating by Vishvas News, this claim turned out to be fake. The viral video is about 8 years old, which is now being shared by linking it to Nupur Sharma case as recent.

Facebook user Katter Hindu shared the viral video on June 13. It is written on the video, “Yogi’s strong reply on Nupur Sharma’s controversy. Everyone will have to pay the price.”

In this video, CM Yogi is heard saying, “Hindu is a symbol of nationalism, not communalism. If you try to defame Hindutva, which is the nationality symbol of India, then you will have to pay the price for it.

To know the truth of the viral video, we extracted several keyframes of the video by Invid tool and searched them through Google reverse image. Meanwhile, we found a report related to the claim on NDTV’s website. It was published on 13 August, 2014. According to the report, Yogi made this statement in Parliament regarding the 1984 Sikh riots and Kashmiri Pandits.

Taking the investigation further, we started searching on Google with related keywords. We found the original video on the official YouTube channel of BJP. It was uploaded on 14 August 2014. In the original video, the part of the viral video can be seen from 9 minutes 37 seconds to 10 minutes 2 seconds. In the original video, Yogi talks about the Sikh riots and Kashmiri Pandits. He says, “Hindu is a symbol of nationalism and if you defame Hindutva, You have to pay for it.”

For more information, we contacted Mrityunjay Kumar, media advisor of CM Yogi Adityanath. He told us that the viral claim is false. This video is from 2014, which is now being shared with wrong claims on social media.

In the last step of investigation, Vishvas News did a social scanning of the Facebook handle of the user who shared the fake claim, Kattar Hindu. It was found that 3,793 people follow this page. This page has been active on Facebook since 5th May 2022.

Conclusion: Vishvas News in its investigation found that the video of CM Yogi Adityanath going viral as recent is old and the claim is misleading. An old video is being shared with connection to Nupur Sharma case