Fact-check: Country’s government schools are not being privatised, viral claim is false

Government schools are not being privatised, viral claims are false. 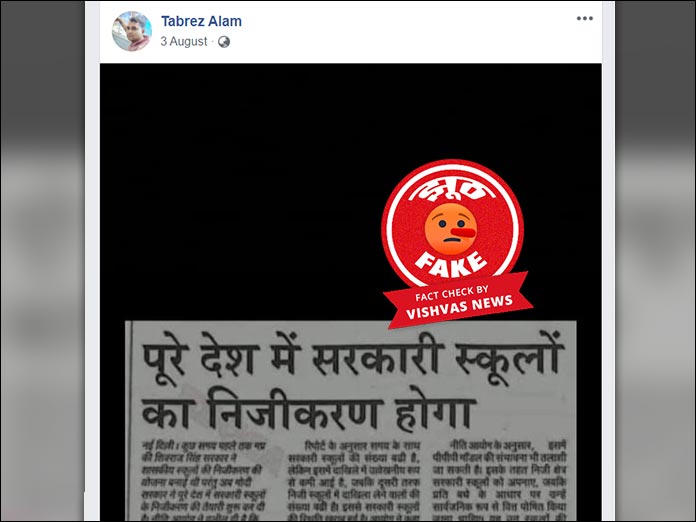 Claim:
A newspaper clipping is being shared on Twitter, Facebook and WhatsApp. The title of the clipping says, ‘All the government schools of the country will be privatised’. This clipping was shared by Facebook User, Tabrez Alam too. Check the archive version of the post here.

Investigation:
Vishvas News initially checked the newspaper clipping. In this clipping a NITI Aayog plan is being stated. Hence, we checked the internet using the important keywords, such as government school, privatisation NITI Aayog on Google. We found an NDTV report published in March which stated that the Union Education Minister in an answer has denied the privatisation of the government schools and also said that there is no such plan as of now.

Other authentic news reports stated that, NITI Aayog in the year 2017 had suggested to privatise all the non-performing government schools under Public Private Partnership (PPP) mode. Since then the claims are going viral on various social media platforms.

We did a social background check on Tabrez Alam who shared the post. According to the information given on the profile, user is a resident of Hajipur.

Conclusion: Government schools are not being privatised, viral claims are false.