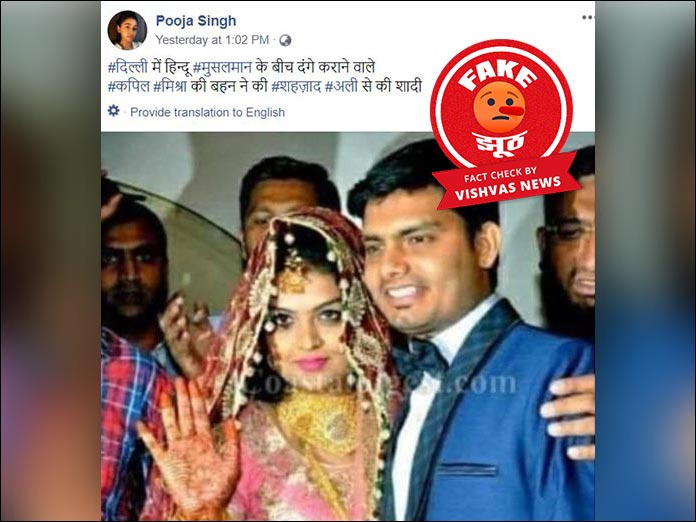 Vishvas News investigated the viral post and found it to be fake. We came to know that the picture of a famous wedding held in Karnataka in 2016 is now being viral as Kapil Mishra’s sister.

Vishvas News first searched for the image using Google reverse image search tool. We found this picture with a news report on a website coastaldigest.com. Public News report published on 18 April 2016 revealed that the picture is of a wedding party in Mysore, Karnataka. The viral image is the picture of a wedding couple Shakeel Ahmed and Ashita. There was a lot of opposition to this marriage as both of them belonged to different religions. Ashita changed her name to Shaista Sultan. The detailed news can be read here .

We accessed a video published by the The Quint’s Youtube channel. It explained the entire issue in detail. The video was uploaded on 19 April 2016. The video can be seen here.

We contacted Kapil Mishra regarding the viral picture. He called it absurd and none of his sisters were married to a Muslim. He also said that the girl in the picture is anonymous to him.

In the end we did social scanning of the user who posted the viral claim. Pooja Singh is from Lucknow and 3,764 followers.

Conclusion: The viral post claiming Kapil Mishra’s sister married a muslim is fake. The girl in the picture is not his sister.