The viral post is fake. Dr Kafeel Khan’s video shot in Rajasthan village is viral as from tractor rally in Delhi. 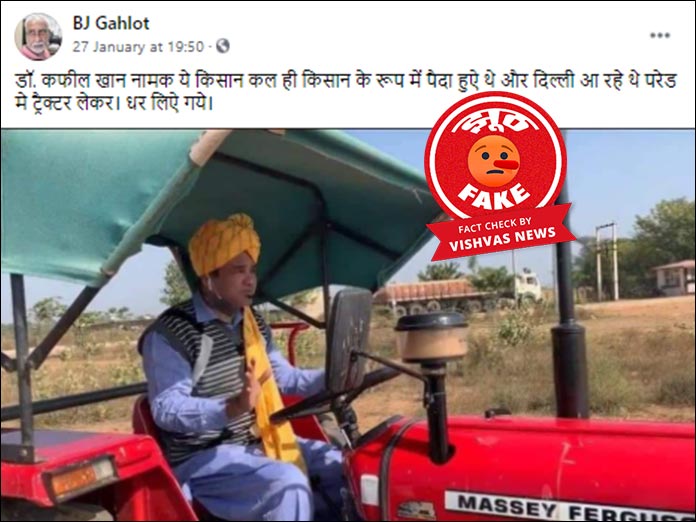 New Delhi (Vishvas News). A viral picture of activist Dr Kafeel Khan sitting on a tractor is shared with a claim that he was detained after participating in the farmer’s tractor rally on the R-Day.

Vishvas News investigation revealed the claim is fake. Dr Kafeel Khan’s video in support of farmers from Rajasthan is viral as from Delhi.

A viral post on social media shared with a picture of Dr Kafeel Khan on a tractor claims he participated in the tractor’s rally held in Delhi. It also alleges that Khan was arrested.We received this post for fact checking on our Fact Checking WhatsApp chatbot (+91 95992 99372). The archived version of the post can be seen here. We also this picture with similar claims on Twitter and Facebook.

We searched on the Internet for news about social activist Dr Kafeel Khan. We did not find any authentic reports confirming the viral claim. We checked his social media accounts for further investigation as his account usually has updates on his activities. We found a video in a tweet posted on 26 January 2021 where he can be seen on a tractor. We could identify the viral picture is an extract from this video, where Khan is sharing information on the basics of driving a tractor.

Vishvas News contacted Dr Kafeel Khan for verification.  Khan refuted the claims saying he has not been to Delhi for over a month. “The picture is from a video  shot on  25 January at Langarwas village in Rajasthan after meeting women labourers working in MNREGA (Mahatma Gandhi National Rural Employment Guarantee Act),” said Khan. He also shared us some pictures of women labourers and flag hoisting event he attended at Republic of Shaheen Academy in Jotwara, Jaipur.

Social scanning of the user who shared the viral claim revealed that his profile was created in October 2014.

Conclusion: The viral post is fake. Dr Kafeel Khan’s video shot in Rajasthan village is viral as from tractor rally in Delhi.