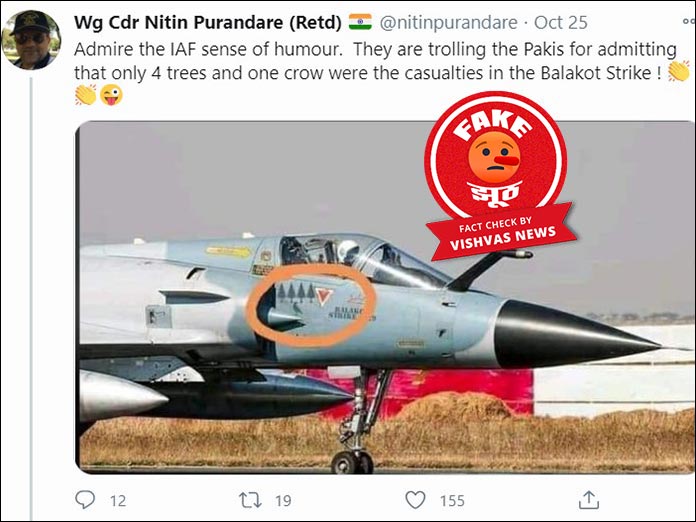 New Delhi (Vishvas News): An image of a fighter plane is going viral on various social networking platforms. It is being claimed along with the post that Indian Air Force is trolling Pakistan after accepting that four trees fell and a crow was killed in the Balakot strikes, with a picture of four trees and a crow on the fighter plane.

Vishvas News, in its investigation, found that an old picture is being widely shared after editing it, along with false claims. Original picture was clicked in Gwalior in the year 2012 at the Air Force station.

Claim:
From Facebook to Twitter the edited picture of the fighter plane is being widely shared. Facebook user, Gopal Sharma shared the picture and wrote along with the post:
‘Admire the IAF sense of humour. They are trolling the Pakis for admitting that only 4 trees and one crow were the casualties in the Balakot Strike ….. Jai hind..’

Check the viral post and its archive version here.

Investigation:
Vishvas News in its investigation, first uploaded the image in the Reverse Image Tool and then searched it over the internet. After that using different keywords we found the image on a website named zone5aviation.com. Along with this picture, other pictures too were shared in the photo gallery. In the caption of the image it was being said that the image was clicked on the Maharajpur Air Force Station of Gwalior in 2012. This image is of Mirage-2000. This was clicked by Angad Singh from Delhi. Click here to check the entire photo gallery.

At the end of the investigation, we checked the account of the user who had shared the viral post. We came to know that Facebook User Gopal Sharma is a resident of Delhi. He hails from Hamirpur, Himachal Pradesh. 340 people follow him.

Conclusion: Vishvas News in its investigation found the viral post to be fake. A picture clicked in 2012 has been morphed and is being shared with false claims.