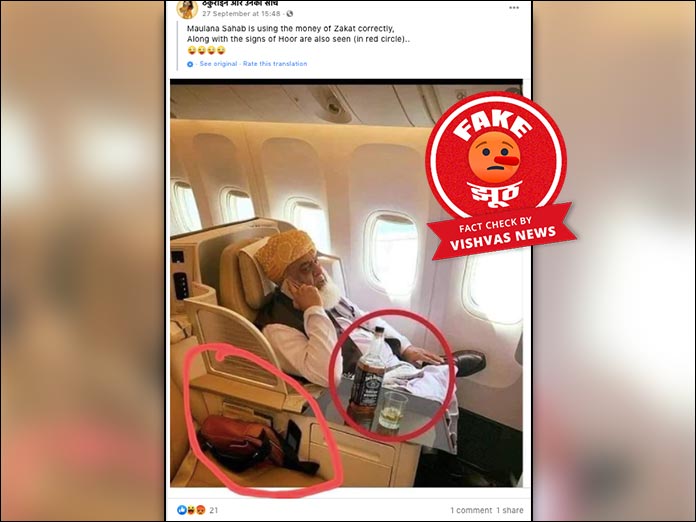 New Delhi (Vishvas News): A picture of a man in a flight with liquor bottle is shared with a claim that Maulana saheb is using Zakat money correctly.

Vishvas News investigation revealed the claim is fake.  The man in the picture is Fazl ur Rehman, a Pakistani politician.  The real picture did not have liquor bottle in it. The photo has been tampered by pasting a wine bottle.

The description of the viral photo pointing out to the liquor bottles in a red circle reads, “Maulana saheb is using Zakat money properly..”

We searched this photo on the Internet using Google reverse image search tool. We found this photo shared by Facebook user Jamiat Talba Islam bajaur on 15 August 2019. However there was no liquor bottle anywhere in this picture.

Another Facebook user Mian burhan syed posted the picture without liquor bottles, identifying the man in the picture as Fazl-ur-Rehman, president of the Pakistani political party Jamiat Ulema-e-Islam (JUI-F).

We searched on the Internet with keywords (Pakistani politician Fazal-ur-Rehman ) and found many of his pictures. We could confirm that the person in the viral picture is Fazl-ur-Rehman.

The viral post has mentioned about Zakat money. We found that Zakat is a form of alms-giving treated in Islam as a religious obligation or tax.

We connected to assignment editor Muhammad Kamran in Pakistan TV channel ’24 News Hd Karachi’ to verify this picture.  “The person in the picture is Fazal-ur-Rehman, president of Jamiat Ulema-e-Islam. The picture is of 2019.  The original picture did not have liquor bottle in it,” said Kamran.

Social scanning of the Facebook page ठकुराईन और उनकी सोच that shared the viral post revealed that it has 1,060 followers.

Conclusion: The viral post is fake. The real picture of Fazal-ur-Rehman has no liquor bottle in it. The real image has been tampered.