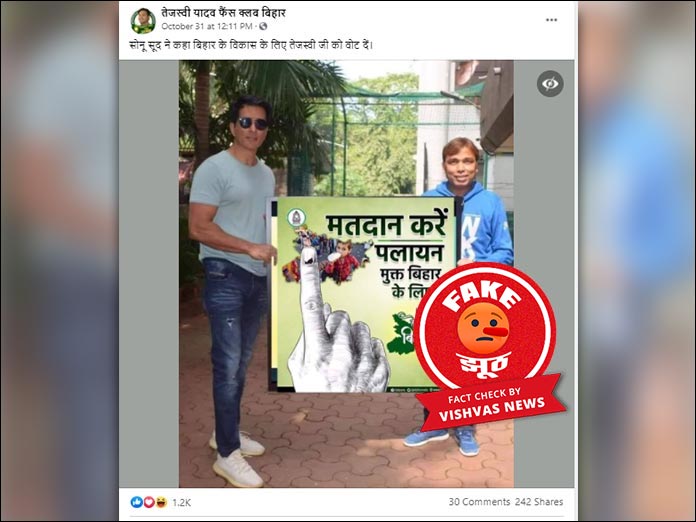 New Delhi (Vishvas News): A post doing rounds on social media shows actor Sonu Sood holding a poster. The poster seems to be a promotion for a political party. The post claims that Sonu Sood requested voters to vote for Tejashwi ji for the development of Bihar”. Vishvas News investigated and found the viral photo to be edited. In the original photo, Sonu Sood was holding a poster in which an artist made his photo, not a poster promoting a political party.

A post going viral on social media shows Sonu Sood holding a poster promoting a political party. The claim with the poster reads, “Sonu Sood said vote for Tejashwi ji for the development of Bihar”.

Vishvas News started its investigation by searching the viral image through Google reverse image tool. We found the picture of Sonu Sood on jagran.com. But, the poster displayed a different picture than shown in the viral post. The poster read, “Bollywood actor Sonu Sood emerged as a real hero during lockdown and sent thousands of migrant laborers from Mumbai to their houses by bus. The artist of the city, Arjun Das, embodied this initiative on his canvas. ”

We also got a video where Sonu Sood and Arjun Das met. This video was tweeted by Artist Arjun Das on October 19, 2020. In this video, it can be clearly seen that Sonu Sood did not hold a promotional poster, but a painting of him and his parents. Sharing this video, Arjun Das wrote, “@SonuSood Sonu bhai, thank you very much for calling me Mumbai and giving me so much respect, thank you. Our love of Jamshedpur is always with you, never miss. I would be proud. Also thanks to @shubhamVawasthi Bhai & @FcSonuSood ”

Vishvas News contacted Arjun Das regarding the matter. He confirmed, “This photo is edited. In the viral picture, I am with Sonu Sood Bhai, but the picture has been edited. The original picture I made was of Sonu Sood and his parents. ”

Now we enquired whether Sonu Sood has supported and campaigned for any political party regarding Bihar elections. We did not find any such news anywhere. On searching, we found a tweet by Sonu Sood on October 28 regarding Bihar elections. In this tweet, he appealed to the public to vote for the right candidate, “On the day our Bihari brothers will not have to leave home and go to another state. The day people from other states will come to Bihar to find work. The country will win on that day. To vote, don’t press the button with your finger, but with your brain.” In the tweet, there was no mention of any political party or any candidate.

Conclusion: Vishvas News investigated and found the viral photo to be edited. In the original photo, Sonu Sood was holding a poster in which an artist made his photo, not a poster promoting a political party.