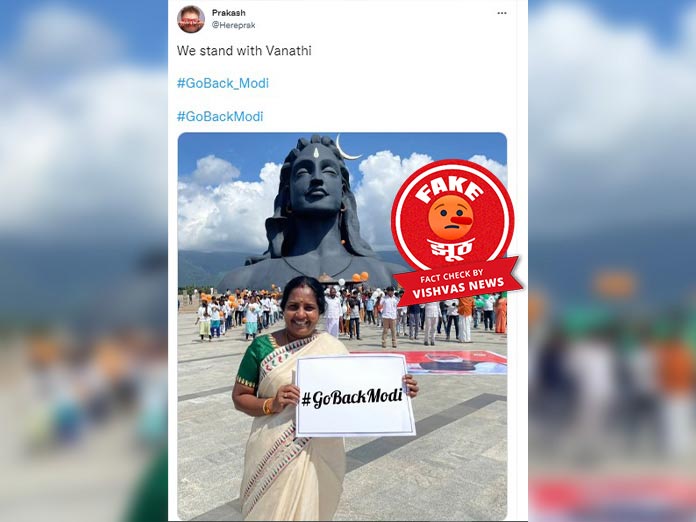 New Delhi (Vishvas News). Prime Minister Narendra Modi was on a visit to Tamil Nadu on 26 May. During this, a photo went viral on social media. In it, BJP Mahila Morcha President Vanati Srinivasan can be seen holding a placard with #GoBackModi written on it. Vishvas News in its investigation found that the photo is edited. The original placard had “India Creates History, 100 crore vaccinations Thank you Modi ji” written on it.

Twitter user Prakash (archive) tweeted the photo on 26 May and wrote, We stand with Vanathi #GoBack_Modi #GoBackModi

To investigate the viral photo, we searched it on Google reverse image. We found this photo on the official Twitter account of Vanathi Srinivasan. It was posted in Oct 2021, to commemorate 100 cr vaccinations. However, the text written on the placard here was different. The text on this placard read “India Creates History, 100 crore vaccinations Thank you Modi ji.”

In the description with the photos, the author thanked PM Modi on behalf of the youth and state president for this achievement of the record100 crore vaccinations.

The video of this program was also uploaded on BJP DINDIGUL DISTRICT YouTube channel on 24 October 2021.

In this regard, we contacted Tamil Nadu BJP President K. Annamalai. We also sent him a viral post on WhatsApp. He called it fake. He himself was a part of this program.

We scanned the profile of user Prakash, who shared the edited photo of BJP leader. According to the profile, he has been associated with Twitter since February 2017 and has 19.5 thousand followers.