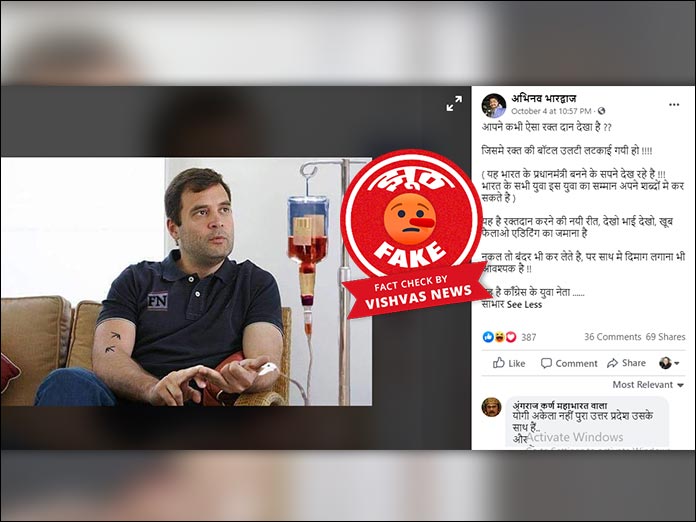 New Delhi (Vishvas News). A picture of Rahul Gandhi seated on a couch with his hand connected to a blood bottle in a saline stand is viral with a claim that he is pretending to donate blood.  The viral post alleges that blood bottle is not mounted on a saline stand but is simply kept lying flat during blood donation procedures.

Vishvas News investigation revealed the claim is fake. Rahul Gandhi’s picture has been digitally edited to be in a blood donation set up.

Facebook user Abhinav Bhardwaj posted a picture of Rahul Gandhi seated on a couch with his hand connected through a tube to a blood bottle in a saline stand. The caption reads, “Have you ever seen such blood donation? …This is the new way of donating blood…” The archived version of this post can be seen here.

We first took a screenshot of this picture and searched it on the Internet using Google reverse image tool. We fond this picture in thehindu.com published on 16 March 2014. The original picture does not have saline stand or blood bottle.

We also found this picture in outlookindia.com  and Punjab Kesari news without the blood donation set up.

Social scanning of the user who shared the viral post revealed that he has 4,999 friends on Facebook.

Conclusion: The viral post is fake. Rahul Gandhi’s picture has been digitally edited with blood bottle and saline stand.