The post going viral amidst the farmers protesting against the farm laws with the claim of a Sikh without a mustache, is being shared with an intention of spreading communal hatred. In the original picture one can easily see that the farmer has a mustache which is edited in the viral picture. 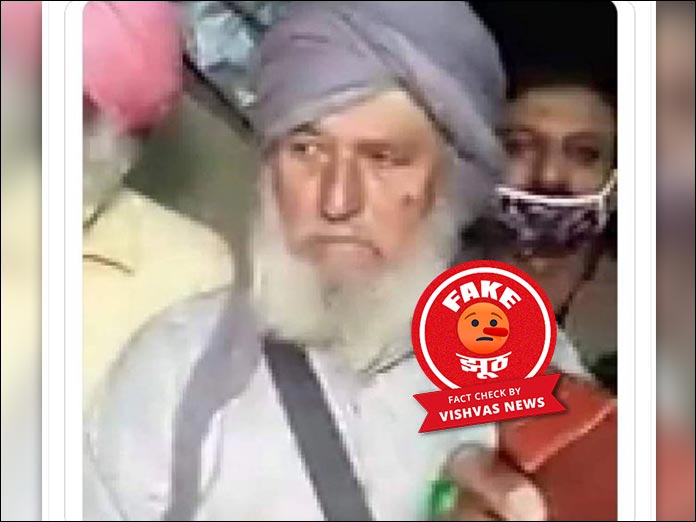 New Delhi (Vishvas News): There has been widespread propaganda on social media about the agitation of the farmers, with the demand to withdraw farm laws. One such picture is being widely shared on social media with a communal claim, in which a farmer can be seen. It is being claimed that this person is a Muslim, who has joined the movement by dressing up as a Sikh farmer, because one can see only the beared of the person and not mustache.

This claim turned out to be false in the investigation conducted by Vishvas News. The person whose photo is going viral with claim ‘Sardar without mustache’ is edited. In the viral picture, the mustache of a Sikh farmer has been blurred. However, in the actual picture, the Sikh farmer can be clearly seen with his mustache.

In the analysis done with the help of Hoaxy tool, the intensity of the image being shared among the social media users can be seen.

Another user, Vishal Gupta, shared the picture and wrote, “Has anyone seen a farmer without a mustache? Has anyone seen that farmer?”
https://twitter.com/vishalurl/status/1333755211148521474

Countless users have shared this picture on Twitter with similar claims.

Facebook user ‘Ramlal Rajpurohit’ shared the viral picture (archive link), and wrote “Sikh with no mustache in Delhi farmers protest. According to astronomy such an event happens once in a century.”

We did not find the original source of this photo when Vishvas News conducted Google reverse image search, but during the social media search we found a comment made on a Facebook post which contained a link to a Facebook Live.

On clicking the link we got a live video. In the 33 minute 38 second video, we saw the same farmer at 7 minute 28 seconds frame, whose picture is being widely shared with the claim that this is a sardar without mustache.

His beard and mustache can be clearly seen in the video, which is being blurred in a viral picture and shared with a false and communal claim.

Vishvas News then contacted journalist Farhan Yahya, who did the conducted the live video on the ‘Hindustan LIVE Farhan Yahiya’ Facebook page. He told us, “I saw a group of farmers near Burari Nirankari Samagam Ground while going towards Sindhu border. Many of the farmers present there had slept in the tents and some were outside at midnight. I urged them to interact and they agreed. After that we went live.

All those present in the video were farmers and had come to join the protests againts the farm laws. The same person whose picture is being shared with false claims can also be seen in the video.”

He added, “Many people are sharing the picture connecting it with Tablighi jammat, however all the people present in the video were farmers.”

Vishvas News does not independently confirm any claims about the religion of the person seen in the viral picture. Over twenty thousand people follow the user who shared the viral picture with a false claim.

Conclusion: The post going viral amidst the farmers protesting against the farm laws with the claim of a Sikh without a mustache, is being shared with an intention of spreading communal hatred. In the original picture one can easily see that the farmer has a mustache which is edited in the viral picture.