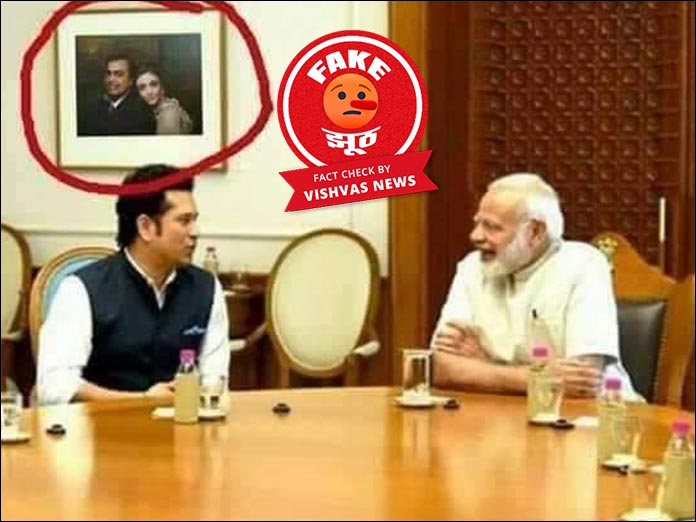 Vishvas News investigated and found that the photo of the Ambani family has been pasted separately through photo editing tools in the viral picture. The post going viral is fake.

Vishvas News searched the viral picture of PM Modi and Sachin through Google reverse image search tool. We found the original picture in a report published on the Business Standard website on May 19, 2017. The report can be read by clicking here. According to this report, Sachin Tendulkar met the Prime Minister related to his film ‘Sachin: A Billion Dreams’.

During the investigation, we also found the viral picture on the Twitter handle of Express Sports. The report dated May 19, 2017 stated that Sachin Tendulkar met Prime Minister Narendra Modi regarding his film.

Vishvas News further investigated by contacting BJP leader Rakesh Tripathi. He said that this viral picture of the Prime Minister is edited.

We scanned the profile of the Facebook user Sumit Valmiki who shared the viral post and found that the user is based out of Delhi.

Conclusion: Vishvas News investigated and found that the photo of the Ambani family has been pasted separately through photo edited tools in the viral picture. The post going viral is fake.