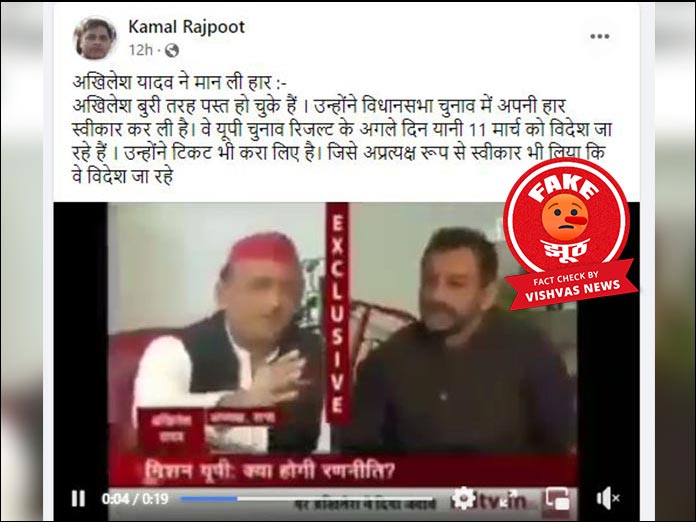 Vishvas News (New Delhi). A 19-second video of Akhilesh Yadav is being shared on social media with the claim that Akhilesh Yadav has accepted his defeat in the Assembly Elections. The post claims that he said that he is going abroad on the very next day i.e. on March 11, after the results of the UP elections. In the video, Akhilesh Yadav is seen giving an interview to an NDTV journalist. During the interview, the journalist can be heard asking, “Are you going to London on the 11th?” In response, Akhilesh Yadav says, “Why won’t I go to London.”

Sharing the viral video, Facebook user Kamal Rajpoot has written that Akhilesh Yadav has accepted defeat: – Akhilesh is badly battered. He has accepted his defeat in the assembly elections. He is going abroad on March 11, the next day of UP election results. He has also booked tickets. Which also means indirectly accepting that he is going abroad.”

To know the truth of the viral claim, we searched on Google using some keywords. During this we found the original video of Akhilesh Yadav uploaded on June 23, 2021 on the official YouTube channel of NDTV. After watching this 26-minute video, we found that during the interview, the situation of Covid-19 in Uttar Pradesh and the farmers’ movement were discussed. At 10 minutes 50 seconds in the original video, the journalist can be heard saying, “People are making allegations, in the midst of all this, that you went to London.” In response to this, Akhilesh Yadav first said, “You should know when I went to London”. He said he expected the journalist to have done his homework. Akhilesh Yadav further clarifies that he had gone to London to get his daughter admitted to the college. Nowhere in this 26-minute video did the journalist say whether you are going to London on the 11th. These words have been added to the video by editing the viral video.

We contacted Samajwadi Party national spokesperson Ashutosh Kumar Verma to confirm this. He told us that the viral claim is false. Misinformation is being spread against Akhilesh Yadav by the opposition parties. Efforts are being made to tarnish the image of Samajwadi Party.

Vishvas News, in the last phase of the investigation, conducted a background check on the profile that shared the viral post. From investigation, we came to know that Kamal Rajpoot is active on Facebook since October 2013. The user is a resident of Chhara city of Uttar Pradesh.