Fact Check: Ex-Election Commissioner Did Not Give This Statement On EVM Hacking, Viral Post Is Fake 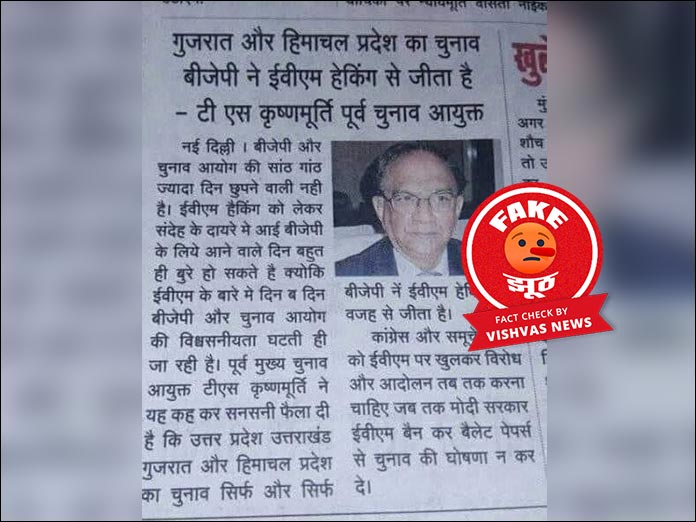 Vishvas News investigated and found the viral post to be fake. The ex-election commissioner did not give this statement.

In the viral news, a fake claim was made that former Chief Election Commissioner TS Krishnamurthy created a sensation by saying that Uttar Pradesh, Uttarakhand, Gujarat, and Himachal Pradesh have won elections only and only because of EVM hacking by the BJP.

Vishvas News searched the social media account of the spokesperson of Election Commission Shefali Sharan to know the truth of the viral post. We found a press note uploaded on his Twitter handle on March 11.

In the press note issued on March 11, it was stated that an FIR has been lodged on the Internet about the viral fake news in the name of former Election Commissioner TS Krishnamurthy. This fake news has already been denied by the pre-election commissioner. It is going viral again. The statement of the ex-election commissioner was also given in this press note. In this, it has been stated that the viral post is completely baseless. Read the press note in detail by clicking here.

While speaking to Vishvas News, the spokesperson of the Election Commission, Shefali Sharan said that the viral post is fake.

We scanned the profile of the Facebook user Vijay Patel who shared the viral post and found that the user is based out of Ahmedabad, Gujarat.

Conclusion: Vishvas News investigated and found the viral post to be fake. The ex-election commissioner did not give this statement about EVM hacking.