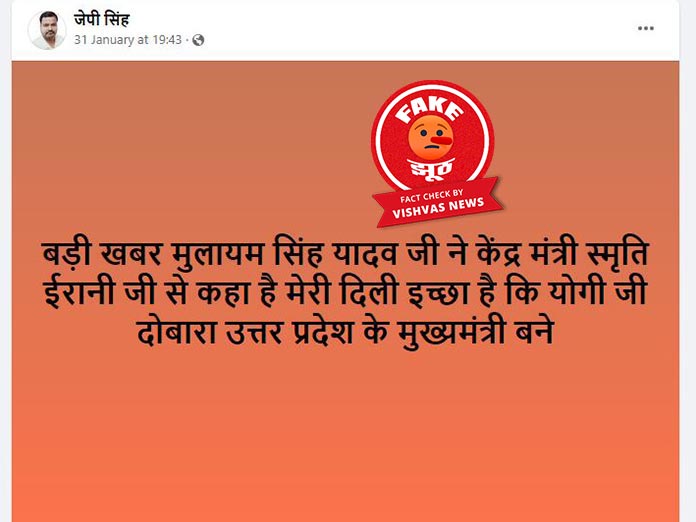 To know the veracity of the viral claim, we searched on Google through some keywords, but we did not find any credible media report related to the viral claim. If Mulayam Singh Yadav had made such a statement, then he would surely have been in the headlines and there must have been some media reports related to it. During the budget session, Smriti Irani had definitely taken blessings of Mulayam Singh Yadav by touching his feet, but there is no mention in any media report that he has said this to Smriti Irani regarding CM Yogi.

Taking the investigation further, we also checked the social media accounts of Smriti Irani. But we did not find any post related to the viral claim.

For more information, we contacted Dharmendra Kumar Pandey, Digital Incharge, Uttar Pradesh, of Dainik Jagran. He told us that the viral claim is false. Both had met in Parliament during the budget session. The entire media was present there. Smriti Irani had touched Mulayam Singh Yadav’s feet, but there was no such discussion there. If this was the case, then either of them would have definitely mentioned this in front of the media.

We contacted Samajwadi Party national spokesperson Manoj Kaka for a thorough confirmation. He told us that the viral claim is false. Mulayam Singh Yadav is a very senior leader. Everyone comes to him and takes blessings and he blesses everyone according to the ethos. BJP’s IT cell is running such false news to malign the image of Samajwadi Party.

At the end of the investigation, we scanned the account of JP Singh, the Facebook user who shared the claim. We came to know that more than fifty-six thousand people follow the user on Facebook. This page of a user named JP Singh is active on Facebook since 12 August 2021.