Vishvas News in its investigation found that this Twitter account created in the name of Digvijaya Singh is fake. It has been suspended. 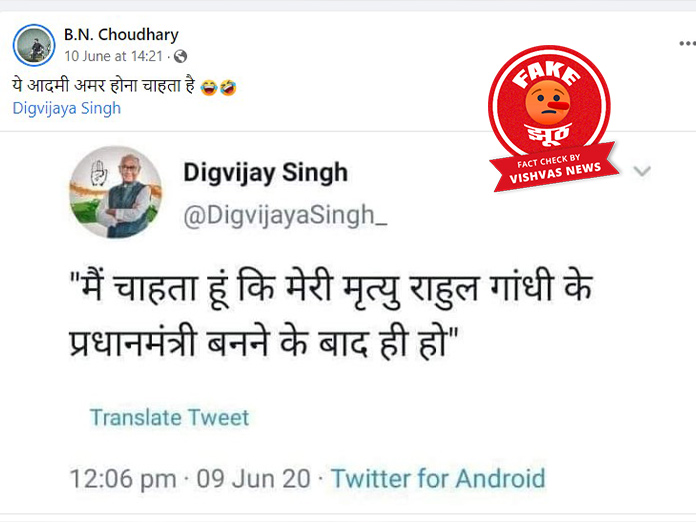 New Delhi (Vishvas News): A controversial tweet about Rahul Gandhi is going viral which is attributed to former Madhya Pradesh Chief Minister and Congress leader Digvijaya Singh. It is written on the tweet screenshot, ‘I want my death to happen after Rahul Gandhi becomes the Prime Minister’. Users are sharing this screenshot as Digvijaya Singh’s tweet. Vishvas News found in its investigation that this Twitter account created in the name of Digvijaya Singh is fake. It has been suspended.

To check the viral claim, we first went through the viral screenshot carefully. There is no blue tick on this account which means it is not verified. After this, we searched for the Twitter ID @DigvijayaSingh_. In this we came to know that the screenshot is suspended.

Taking the investigation further, we started searching about this ID on the web archive. During this we found that this ID has been changing name from time to time. According to the information received on the web back, it is written in the bio of this ID that the person is a resident of Ajmer. After this we started searching the official Twitter handle of Congress leader Digvijaya Singh. During this time we could not find any tweet related to the viral claim.

We started searching with related keywords on Google, we found a media report related to the claim. It was published on 11 June 2020. According to the information given in the report, Digvijaya Singh had complained to the cyber cell about this fake account running in his name.

For more details we contacted Bhupendra Gupta, Digvijay Singh’s OSD. He told us, ‘The viral claim is false. Digvijaya Singh has not made any such tweet. Opposition parties are spreading such fake news to spoil Digvijaya Singh’s image.

At the end of the investigation, Vishvas News did a social scanning of the Facebook user who shared the false claim. We came to know that 1289 people follow Facebook users. According to the information given by the user on Facebook, B.N. Choudhary is a resident of Rajasthan.

Conclusion: Vishvas News in its investigation found that this Twitter account created in the name of Digvijaya Singh is fake. It has been suspended.