Fact Check: Famers did not protest to restore article 370, viral claim is fake 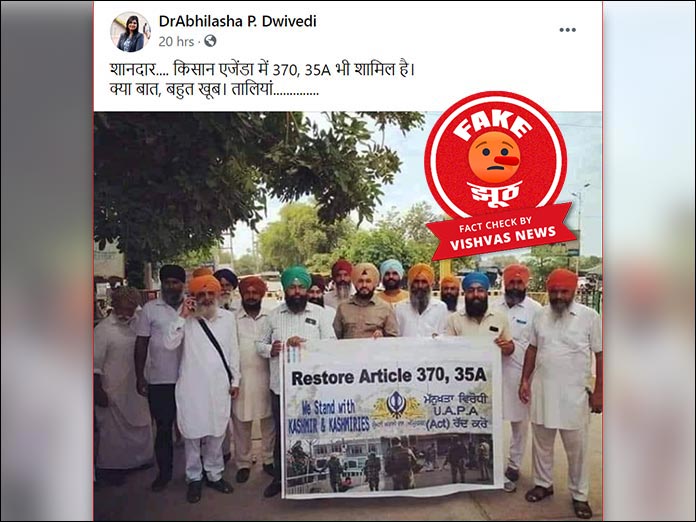 New Delhi (Vishvas News). Amid the farmers protest in the country’s capital, a picture of some people with banner demanding to restore article 370 and 35A is viral on social media. It is shared with a claim that farmers are also protesting in support of Kashmir.

Vishvas News investigation revealed the viral claim is fake. viral posts. The viral picture is old and not related to farmers protest.

Facebook user doctor Abhilasha Dwivedi uploaded a picture on 30 November writing, “Great…. The farmer agenda also includes 370, 35A…”
The archived version of the Facebook post can be seen here.

We observed the viral picture where we noticed people holding a banner demanding to restore Article 370, 35A. We searched on the Internet using Google reverse image tool and found it on Facebook page Shiromani Akali Dal uploaded on 8 August 2019.

While the farmers’ protest against the Agricultural Bill has just begun, the date line clarifies that the picture is not from any recent event.

Vishvas News contacted Nitin Dhiman, Dainik Jagran’s Amritsar reporter to verify the claim. “The viral picture has no connection with the recent farmers’ protest. This photo is old. It was captured 2019 when Shiromani Akali Dal protested to restore article 370 and 35A.”

Social scanning of the user who shared the viral post revealed that he lives in Delhi and has more than seven thousand followers on Facebook.

Conclusion: The viral post is fake. An old picture is now viral as from recent farmers’ protest.