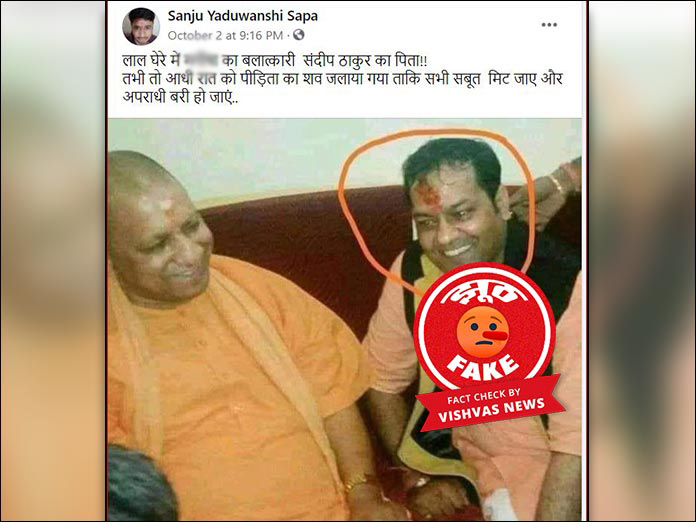 New Delhi (Vishvas News). A picture of a man with UP Chief Minister Yogi Adityanath is viral with a claim that he is the father of rape accused Sandeep Thakur in the Hathras case.

Vishvas News investigation revealed the claim is fake. The person in the viral picture is Dr Shyam Prakash Dwivedi, former BJYM leader of Prayagraj. He does not have any connection with Hathras case but currently is in jail on rape charges.

That’s why the victim’s dead body was burnt at midnight so that all the evidence would be erased and the culprits would be acquitted…”The archived version of Facebook post can be seen here. Several users shared similar pictures with such claims.

We also found the viral pictures on news website. According to an article in the NewsTrack published on October 3, “BJP leader Shyam Prakash Dwivedi, accused of gangrape from Prayagraj, was arrested by the police. The accused was absconding for several days.”

We searched for Prayagraj’s newspapers to confirm the news. We found a news report in Dainik Jagran’s epaper published on October 4. It confirmed that Dwivedi was arrested and sent to jail in the gang rape case.

We contacted Dainik Jagran’s Prayagraj editor Rakesh Pandey to verify the claim. He told that the man in the picture with CM is not the father of accused Sandeep Thakur, but Dwivedi.  “A complaint was lodged in the Colonelganj police station on September 15 against Prakash Dwivedi in a 2019 gang-rape case. He was arrested on 3 October. He is currently in jail,” said Pandey.

Conclusion: The viral post is fake. The man in the picture with UP CM is Shyam Prakash Dwivedi, former BJYM leader of Prayagraj.