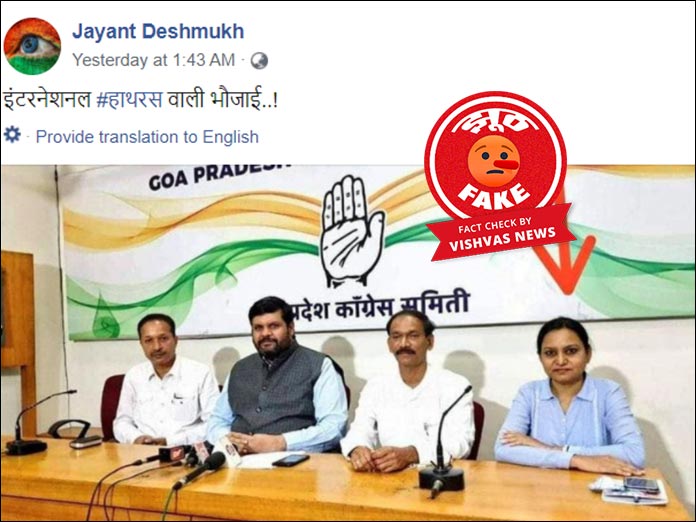 New Delhi (Vishvas News). A picture of a woman seated in a Congress event is viral with a claim that she is Dr Rajkumari, who visited the Hathras Victim’s family and gave interviews to News channels.

Another social media user shared the picture writing, “Hathras fake bhabhi in the Congress event…” The archived version of viral post can be seen here.

Vishvas News first started searching for viral images using the Google reverse image tool. After scanning several links, we found the original picture  on Pratibha Borkar’s Facebook account. It was her cover photo on 12 May.

We visited the Goa Congress Facebook page and found this picture of a press conference  held on 29 September 2019.

We contacted Pratibha Borkar, the social media head of the Goa Congress to verify the claim. She told us that her picture is viral with fake claims as Naxal Bhabhi of Hathras. “The picture of a press conference held last year is viral with false claims to harass me. A complaint has been filed to the Goa Police,” said Borkar.

We decided to investigate about the sister-in-law (Bhabhi) conspiracy in the Hathras case. According to a news article in the Dainik Jagran, “The SIT team is looking for a woman from Jabalpur, Madhya Pradesh. Meanwhile, on being accused of being a Naxalite, Dr. Rajkumari Bansal released a statement to the media…”

The article has quoted Bansal’s statement clarifying that she has no relationship with the victim’s family but only visited them in Boolgadhi village.

The India Today’s Twitter handle has posted a video on 13 October where Bansal can be seen denying claims about her connection with Naxalites.

Conclusion: The viral post is fake. The woman in the picture is not Dr Rajkumari Bansal, who visited the Hathras victim’s family. Goa Congress social media head Pratibha Borkar’s picture is shared with fake claims.