Fact Check: Government has not issued any order against sharing political posts online 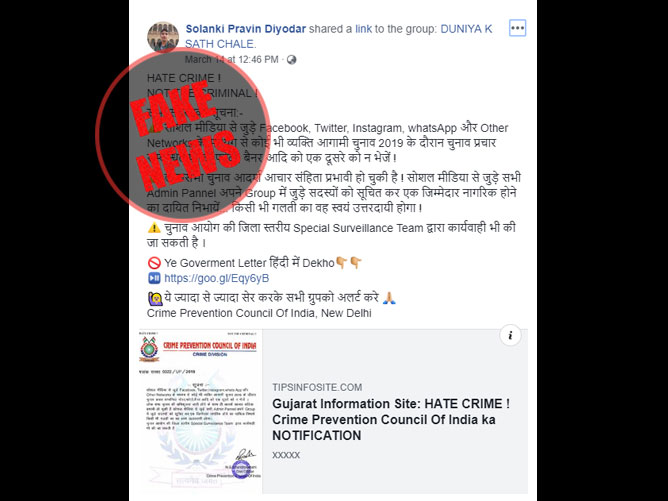 New Delhi (Team Vishvas) A letter is going viral on social media which, according to its description, is a government order. The letter asks people to avoid posting political posts on Facebook, Twitter, WhatsApp and Instagram. In fact, no such letter has been issued by the government. The letter was actually issued by an NGO which was later retracted.

The letter issued by ‘Crime Prevention Council of India’ reads, “Do not share election-related posts, photographs and posters”. “No person should share political posts via Facebook, Twitter, Instagram, WhatsApp and Other Networks associated with social media as part of election campaign during the upcoming election, 2019!”

In the end the letter says “The District level Special Surveillance Team will take action against anybody found guilty.”

Many social media users have shared this information.

He told us further that “The letter viral on social media was wrongly issued by a member of CPCI and not the organisation. He should not have issued the letter as a ‘notice’ but only as a suggestion in public interest. The concerned person – District Officer Narendra Singh – has now been terminated from his position and is not associated with the organisation any more,”

“A letter has also been issued by CPCI in this matter and it has been clarified that the earlier ‘information’ was not issued by the organization. It is also mentioned in this letter that the Crime Prevention Council of India is a non-governmental organization.”

We talked to an Election Commission official for more information and we were told that there is no directive to take any action against general public for sharing any post. The EC has issued guidelines only for the candidates and political parties.

Conclusion: In our investigation, we found that the government has not issued any letter asking the general public to avoid sharing political posts ahead of 2019 Loksabha elections. The viral letter was erroneously released by an NGO official.