The viral claim is fake. CM Vijay Rupani has recovered from covid. 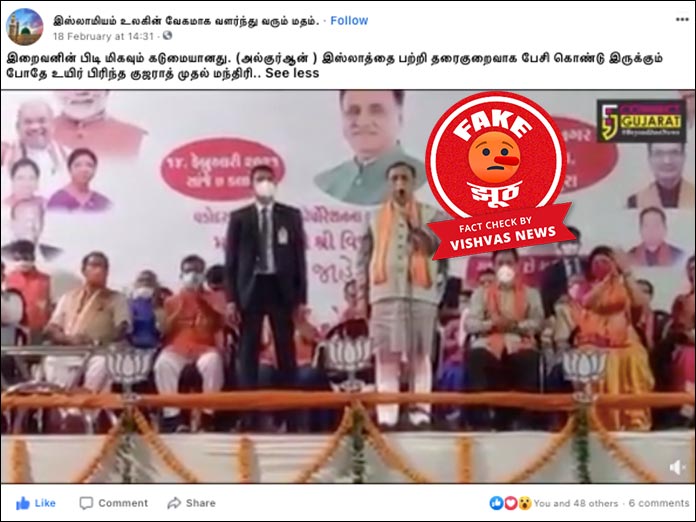 New Delhi (Vishvas News). In a worrisome bizarre post, a video of Gujarat Chief Minister Vijay Rupani fainting off on stage during his public address is shared on social media with a claim that he collapsed to death.

Social media users have shared a video of Gujarat CM Vijay Rupani fainting on stage during his public address claiming that he collapsed to death. The archived version of the post can be seen here.

In our investigation, we found news articles published along with the viral video.

Gujarat Chief Minister Vijay Rupani was addressing an election meeting in Vadodara late on Sunday night, during which he suddenly fell on the stage due to physical fatigue, weakness and decreased blood pressure level, states an article in the Dainik Jagran published on 15 February. The Chief Minister admitted to the UN Mehta Heart hospital, Ahmedabad was tested positive for coronavirus.

Days after he was found infected with coronavirus, CM Rupani tested negative for the infection, following which he cast his vote for the municipal corporation election in his hometown Rajkot in the evening, states a recent article published on 22 February.

We also found a live video by CM Rupani on his twitter addressing public meeting at Godhra.

Social scanning of the FB page that shared the viral video revealed that it has 13,015 followers and is active since 21 January 2014.

Conclusion: The viral claim is fake. CM Vijay Rupani has recovered from covid.