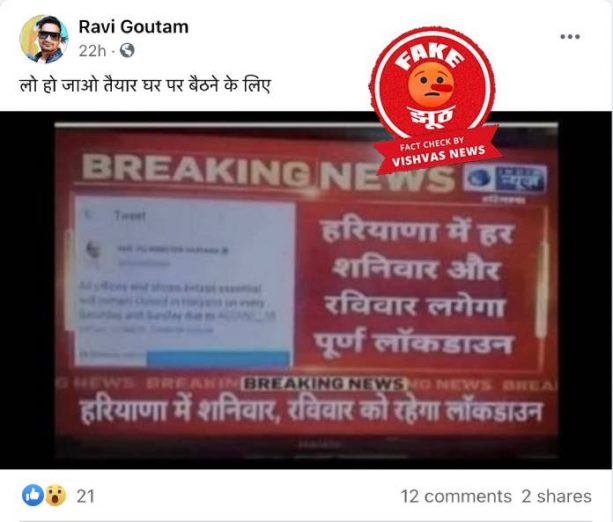 New Delhi ( Vishvas News). A viral news card with a screenshot of a tweet from Haryana Health Minister Anil Vij claims the state is under complete lockdown on Saturday and Sunday.

Vishvas News investigation revealed the claim is fake and the news card is old. Health Minister denied the claims on the state going under lockdown.

A viral news card of India News with a picture of a tweet from Anil Vij, Haryana Health Minister informs the state is under complete lockdown on Saturday and Sunday. Facebook User Ravi Goutam posted the image yesterday, suggesting it to be a recent announcement. The archived version of the post can be seen here.

Haryana  recorded yet another high of 872 new Covid-19 cases with 4,380 active cases on Friday, according to a recent news report.

Despite the increasing cases of coronavirus, the government has said lockdown or night curfew is not being considered. Home and Health Minister of the state Anil Vij held a meeting with all the Deputy Commissioners, Civil Surgeons and top police officers of the state regarding the corona infection. Vij has clearly stated that he is not in favor of any kind of lockdown or night curfew, stated a news article.

We found the same news card on another Facebook page uploaded on 22 August 2020.

While we could confirm the viral news card is old, Vishvas News contacted Anil Vij, Haryana Health Minister to know if there is any recent announcement. “The viral claim is fake. There is no lockdown,” he replied to us on call.

Social scanning of the FB user who shared the viral post revealed that he is from Fatehabad, has 4,950 friends on Facebook and is active since April 2016.