Fact Check: IAF’s Sukhoi-30 jet was not shot down in Tibet, viral claim is fake 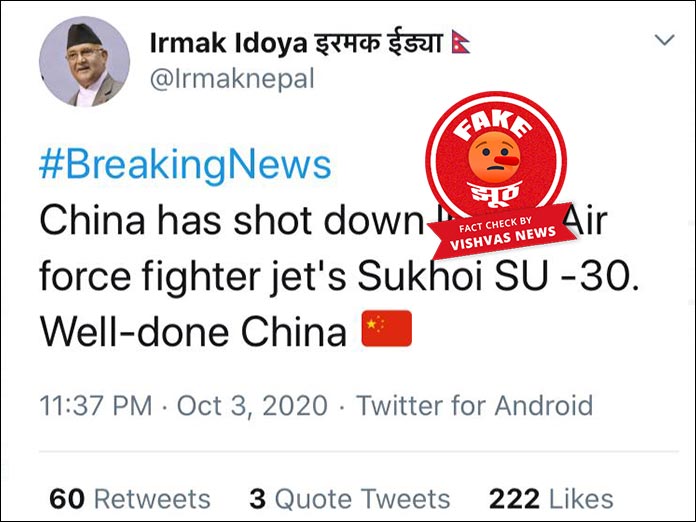 New Delhi (Vishvas News): A viral post on social media claims that China has shot down Indian Air force (IAF) fighter jet’s Sukhoi SU-30. We found this was shared as breaking news first on Twitter and then on Facebook.

Vishvas News investigation revealed the claim is fake. IAF has denied such claims.

A viral post on social media claims that China has shot down Indian Air force (IAF) fighter jet’s Sukhoi SU-30 in Tibet. The archived post can be accessed here.

Our searches on the Internet had no recent information on this claim. However we found news reports on IAF’s operation in the borders.

An article published by the Dainik Jagran on September 25 states, “During the ongoing tension between India and China, the Indian Air Force kept its watchful eye on the border… The Indian Air Force operated Su-30 MKI fighter aircraft at Ghulam Kashmir (PoK) and a forward air base near the China border.”

We also found a tweet by ANI confirming Sukhoi’s operation in India’s border.

Vishvas News contacted the Indian Air force to verify if China has shot down Sukhoi – 30 fighter jet. Wing Commander Indranil Nandi denied the claims and told us no such incident has taken place.

Social scanning of the FB Page Sardar Dilnawaz PTI that shared the viral post revealed that it has 3,260 followers and is active since 13 May 2018.

Conclusion: The viral post that China has shot down IAF fighter jet’s Sukhoi – 30 in Tibet is fake. IAF has denied the viral claim.