Fact Check: Image of a bus edited with Ambedkar’s Photo In its windowpane viral with fake claim 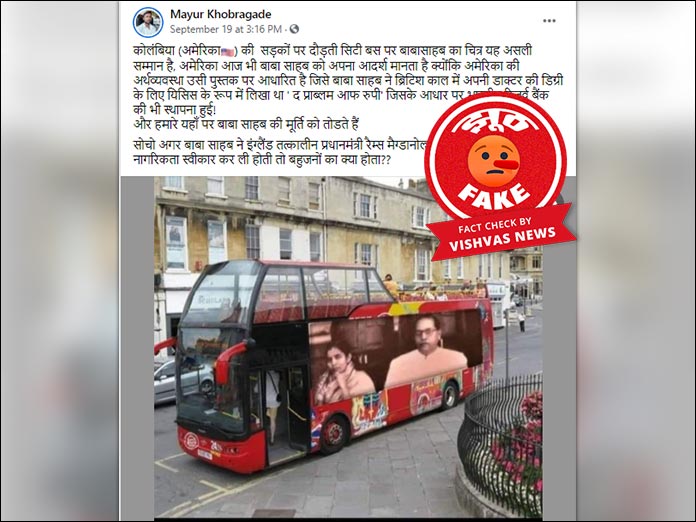 New Delhi (Vishvas News). A photo of a bus with Babasaheb Dr. Bheemrao Ambedkar picture on its windowpane is viral on social media with a claim that its in a city bus running on the streets of Columbia (United States of America).

Vishvas News investigation revealed the claim is fake. We found that an old picture of a bus captured in 2008 has been edited with Ambedkar’s picture on its windowpane.

A picture of Ambedkar and his wife can be seen on the windowpane of bus in a viral post. The post reads, “Babasaheb’s picture on a city bus running on the streets of Columbia (America) is a real honor, America still considers Babasaheb as its ideal because America’s economy is based on the same book that Babasaheb had written in the British period. I wrote for my PhD in the form of a thesis, The Problem of Rupee’, on the basis of which the Reserve Bank of India was also established. And here we break the idol of Babasaheb. Imagine what would have happened to the Bahujans if Babasaheb had accepted the citizenship of England at the request of the then Prime Minister Ramsay McDonald?”

We searched this image on Google reverse image. We found this picture of the bus on commons.wikimedia.org without Ambedkar’s image on its windowpane. The picture descripton reads, “City Sightseeing 273 (EU05 VBJ), a Volvo B7L / Ayats Bravo City, in Bath, Somerset, England”. Unlike many City Sigthseeing tours run under franchise to other operators, this one is run directly by the company. According to the website, the photo was captured on 28 July 2008 by a photographer Adrian Pingstone.

We compared both of these photos where we could clearly see the original picture did not have Ambedkar’s image on its windowpane as in the viral post. We could confirm that Ambedkar’s picture was pasted on the original image using photo editing tools.

We contacted Adrian Pingstone’s son John to verify this claim. “My father captured this bus picture in 2008. The viral photo is edited,” said John. He added that photography is his father’s hobby but he has retired.

We further decided to investigate Ambedkar’s picture pasted on the viral photo. We found the image in Outlook’s photo gallery. This same picture of Ambedkar has been edited and pasted on the bus picture.

With the help of keyword search, we tried to find out if buses were plying on the streets of Columbia Ambedkar’s picture. We did not find any such news on the Internet.

However, Ambedkar did his studies from Columbia University (New York). Ambedkar’s autobiography ‘Waiting for a Visa’ is still included in the curriculum of Columbia University. Also, while talking about Ambedkar in his speech in the Indian Parliament on 08 November 2010, the then US President Obama said, “The way Dr. Ambedkar, a Dalit, made himself worthy that the Constitution of this country was created in order to protect the rights of Indians, every person should himself worth it.”

Among many social media users sharing the viral post, social scanning of Facebook user Mayur Khobragade’s profile revealed that he is from Maharashtra and has 4,997 followers.

Conclusion: The viral post is fake. A picture of a bus captured in 2008 has been edited with Bhimarao Ambedkar’s picture on its windowpane.